It’s been estimated that visitors to New York City can choose from over 1,000 site seeing options, ranging from such iconic attractions as the Statue of Liberty and the Empire State Building to off-the-beaten-path tours like the Best of Brooklyn Food and Culture Tour. Of course, no visit to the Big Apple is complete without the opportunity to see a Broadway play but you need to see it with the VIP experience.  Here are 12 Luxury experiences for your enjoyment.

With a unique all-glass design inspired by the venerable river boats of Europe, the elegant Bateaux New York delivers creative plated cuisine alongside gracious service and 360 degree views of the New York Harbor and the Statue of Liberty. Offering brunch, lunch, dinner, cocktail, moonlight and charter cruises any day of the week, guests can enjoy the lighthearted sounds of Bateaux New York’s live entertainment to include a talented vocalist and acoustic trio performing popular selections of soft jazz, Broadway and blues hits.

Taste the $1000 Sundae – the Golden Opulence

The ultimate in creamy decadence, the Golden Opulence Sundae at Serendipity 3 lavishes you with some of the finest things in life. At the astounding price of $1,000 per sundae, this treat holds the record as the Guinness Book of World Record’s most expensive sundae. No doubt, if you order this, you will impress all those around.

Atera is known for it’s 20 course tasting menu.  Anybody hungry??

The Presidential Suite at The St. Regis New York is the second most expensive suite in New York at $35,000. Designed as a collector’s suite, The St. Regis New York’s Presidential Suite comes with a marble foyer, fully equipped kitchen, and library—as well as up to three bedrooms, four bathrooms, and one half-bathroom. The hotel also features various ϋber-glam designer suites including theBentley Suite, a Dior Suite, Tiffany Suite and Milano Suite.

A slice of heaven on the 19th floor of the legendary Art Deco hotel, the Guerlain Spa at the Waldorf Astoria New York is known to be quiet, like you’re on your own private cloud. The luxurious 14,000 square-foot urban spa retreat offers signature treatments such as the Guerlain Methodé and the iconic Orchidée Impériale treatment and skincare.

Celebrate your visit to New York City with a private helicopter flight over Manhattan. What could be more romantic than a personalized 20-minute flight over NYC? 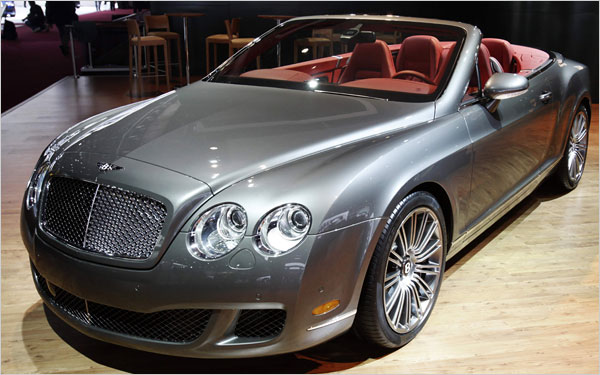 Pop the hood and you’ll find a 552 horsepower W-12 engine that accelerates from 0-60 in 4.7 seconds, and has a top speed of 198 mph. Plus, its 6-speed Triptonic transmission will let you experience a speedy and sporty drive with exceptional handling. You’ll be in awe as it hugs every twist and turn on the road, and passers-by will be in awe at the luxury-sport hybrid that zooms right before their eyes.

Just 20 miles from Manhattan, this exclusive enclave is best known for it’s exquisite cuisine by Thomas Henkelmann, a distinguished Les Grandes Tables Du Monde restaurant. Though the facade of the Homestead Inn may appear to be a traditional Victorian Cottage, the interior is probably one of the most fascinating spaces you will see. Decked with touches of European, Balinese and elements from her world travels, Theresa Henkelmann has created an international space that appeals to jet-setters and sophisticates alike.

Experience a luxury suite at Madison Square Garden.  Watch a game, concert or your favorite dj in style.

Nino’s Bellissima Pizzeria in New York City has one of the most expensive pizzas in the world. It’s topped with $820 worth of different types of caviar and the other remaining $180 covers the cost of the pizza and Maine lobster they sprinkle on top. This decadent treat is worthy of a king. The owner Nino Selimaj started as a dishwasher in 1958, and now owns five restaurants that cater to highly regarded clients. Some of his customers have included Regis Philbin, Chelsea Clinton, Hilary Duff and members of the cast of The Sopranos.

Get The Wizard Will See You Now tickets for the musical Wicked, which is celebrating a full decade on Broadway this year. The package includes premium orchestra seating, a three course dinner at E&E Grill house, personal concierge service to deliver drinks during the intermission, a meet and greet with the cast backstage and an autographed program book. New York is known for spectacular Broadway performances, after all there is a whole street dedicated to them!

Watch the New York Jets or the Giants play in style at the Metlife stadium with your own luxury suite. The stadium has four levels of suites available, that come with 12-30 tickets for guests and a special parking space and access to a private entrance. Enjoy watching the game from above from a your private viewing area and catching close ups on TV.

Suites come with personalized service, a suite level washrooms and a wet bar. During the Superbowl the luxury suites went as high a $925,000 for the big game. It was the highest suites had ever cost, previously fans would have expected to pay $125,000 for the best suites on game day.

What is your favorite luxury experience in NY?  Please tell us d@destinationluxury.com.