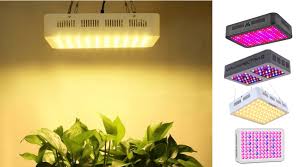 Full-Spectrum LED Grow Lights: All You Need To Know

Full-Spectrum LED Grow Lights: All You Need To Know

Image by HarrietP from Pixabay.

Grow lights come in a variety of shapes, sizes, and spectrums. Recently, LED grow lights, particularly those that claim to provide the full spectrum of light, have become popular. Before you take the plunge and purchase full-spectrum LED grow lights, you may be wondering if it’s worth the hype and, given that LEDs tend to be among the more expensive lighting options, the price. Let’s find out-

What Does Full-Spectrum Mean?

Image by Free-Photos from Pixabay.

LED lights have been around for a while now, and most people are familiar with them as a more efficient, longer-lasting alternative to incandescent or compact fluorescent lights. LED stands for light-emitting diode, and the main difference between an LED light and other lights is that they emit light in a single direction. Directed light emission means they can use energy more efficiently rather than losing it to the surrounding environment. They also do not contain mercury like many other lights. Using LED lights is both environmentally friendly and better for your power bill.

A full-spectrum LED light claims to produce light resembling sunlight, and to humans, it does. That’s what a bullet point on a product page referring to a color-rendering index (CRI) of 90 or higher means. The highest possible CRI is 100, which is the same as a standardized level of daylight.

Full-spectrum LED lights are popular in homes and offices for just that reason: to us, colors appear the way they should when lit by an LED light. The spectrum being referred to when a product claims to provide the full spectrum of light generally means the light we can see from red to violet, like in a rainbow, along with infra-red light.

While it all sounds very scientific, "full-spectrum" is a marketing term. From a scientific perspective, the full electromagnetic spectrum ranges from gamma rays produced by radioactive particles to radio waves, which, while not harmful, aren't useful to plants either. This can be confusing because both the full range of electromagnetic radiation and visible light are referred to as a spectrum. It's easiest to think about them in terms of their wavelengths. The full electromagnetic spectrum encompasses wavelengths between one billionth of a nanometer and one hundred kilometers. As discussed in the next section, plants only use wavelengths between 400 and 700 nanometers, roughly the same as what human beings can see, making it the "full-spectrum" of visible light. In this article, the spectrum being discussed is just visible light.

Plants don’t care whether the light they receive looks like sunlight to humans. Instead, plants use a specific range of light called photosynthetically active radiation (PAR) to photosynthesize. PAR involves electromagnetic wavelengths between 400 and 700 nanometers. Some full-spectrum LED grow lights advertise a wider range of values than that as if it’s a benefit when, in fact, it’s meaningless in terms of plant growth. Human eyes see a slightly wide range of light than that. According to NASA, the average human can see the light between 380 and 700 nanometers.

The traditional way of thinking has been that blue and red light are the most useful to plants because they absorb that the most. That is why many conventional LED grow lights appear purple: they are a mix of red and blue light. At first glance, this might seem confusing. Our sun, after all, produces more yellow light than anything else. It would make sense for plants to have evolved to use the natural light. However, red-light meets a plant’s long-wavelength needs better than yellow does, and blue meets its short-wavelength needs the best. Plants appear green because most of the light that bounces off rather than being absorbed is a green or yellow light. Today, even the best variety of pocket scales with LED screens use full spectrum lightings.

Only providing red and blue light isn't usually the best option, though. Plants use all the colors of visible light even if it is only in trace amounts, so providing red and blue light to exclude other colors may limit your plants' growth. Think about providing your plants with a wide range of light the same way you would think about feeding an animal or yourself a balanced diet. Some lights that market themselves as full-spectrum do this; others do not. It's essential to look beyond the packaging to discover what the light is actually going to provide.

Are Full-Spectrum LED Grow Lights Worth It?

Full-spectrum LED grow lights might be worth it for you. It all depends on your growing environment. If you live in an area and environment where you can grow your plants outside without fear of damage from frost or wildlife, then do so. Nature usually knows best.

Unfortunately, most of us don’t live somewhere with perfect growing conditions. If you have a greenhouse, you can get away with providing red and blue light only. The sun is already providing a proper full spectrum of light, so you can simply boost your plants’ preferred colors. In this case, look for grow lights that market themselves as narrow-spectrum. If your plants are somewhere without much natural light, you should consider investing in a grow light that offers a wide variety of light. These lights will likely be marketed as broad-spectrum or full-spectrum, but you should still look closely at the product details before making a purchasing decision.

There are other factors to consider when purchasing a grow light. Power consumption, price, size, and bonus features are essential to keep in mind. Timers are incredibly handy because they allow you to provide the right amount of light for your plants, even if you aren't there to turn them on or off. If you’re running late at work or on vacation, you can relax knowing that your plants are still receiving the light they need.

You should also look for LED lights that disperse heat well. If an LED grow-light becomes too hot, it can damage your plants. If an LED overheats, it can also reduce the life of the light. Since LEDs tend to be more expensive than incandescent or fluorescent lights, you should make sure you’re getting your money’s worth. In the end, it's up to you to decide what the best option is for your unique circumstances.