We all have that burning desire to get away. And while traveling can be amazing, and it can also be a huge pain. The latter is usually the minutiae of tripdom – lugging your bags, airport security, checking in, checking out…and if you’re off on a jaunt of 10 cities in 14 days, this can not only be cumbersome, it can be ridiculously exhausting.But there’s hope out there…behold! The river cruise!

In the past few years, river cruising has seen an uptick in popularity. (Full disclosure, I myself had never taken a river cruise until this one, but the notion of schlepping around like I just mentioned in paragraph one was just too much to deal with). According to a new AAA survey, 14 percent of Americans have enjoyed a river cruise, and approximately four in 10 would consider river cruising for an upcoming vacation. Viking River Cruises – now heading into its 20th year – has a fleet of 35 vessels that travel the rivers of Europe, Russia, Ukraine, China, Southeast Asia and Egypt. They are designed to provide a more intimate and accommodating experience with only a few hundred guests.

Our Viking experience was entitled The Romantic Danube, 8 days traveling from Germany, through Austria and finishing up in Hungary. All told, there were 190 passengers onboard and while there was a couple of families, the average age skews mid-60’s, and American. 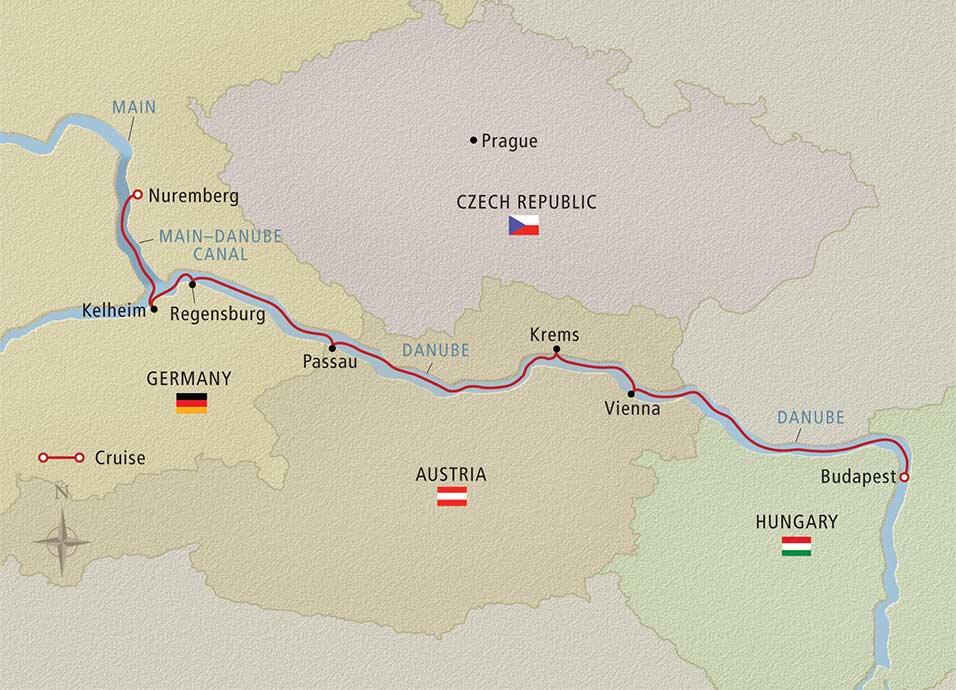 Our stroll down the Danube. Image courtesy Viking River Cruises.

River cruising is undoubtedly a wonderful opportunity to explore a different landscape daily – for example, during our trip, we woke up to the beauty of Bavaria one day, and closed out another with the city Budapest lit up like a Christmas tree as we cruised the Danube into the late evening.

Unlike ocean liners, filled with sometimes thousands of passengers, these cruises are much more intimate – during the course of the trip, I got to know at least 20-30 people on a first name basis. Every night was filled with cocktails, that guy at the piano (that’s one thing that needs to be retrofitted for the 21st century) and laughter.

Then there’s the accommodations. First off – never do you feel like you’re not on land. The sailing is smooth throughout – aka – not a chance in hell of getting seasick. Each room has been masterfully designed – despite small spaces, the flow is the epitome of convenience and Feng shui – and the bathrooms are so ridiculously beautiful, they look straight out of Elle Decor. 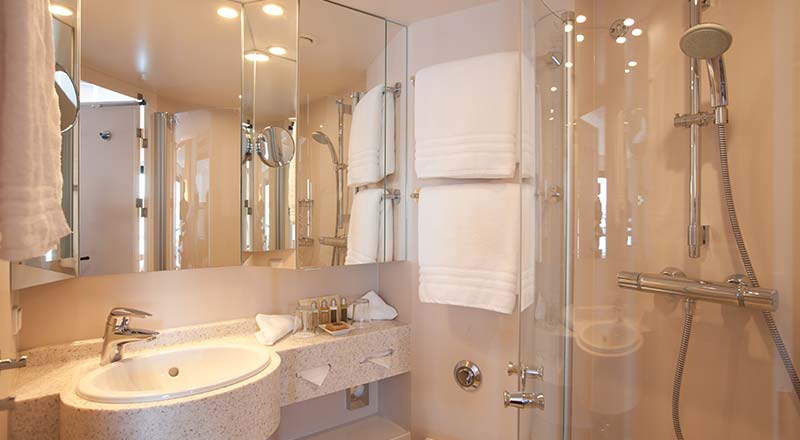 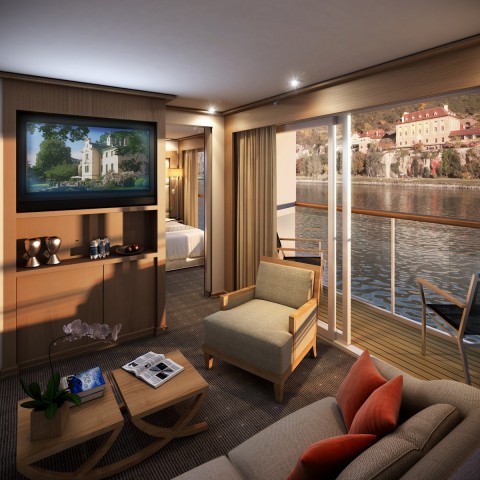 But back to the river cruise. Undoubtedly, the best day excursions were some of the smaller ones. With each stopover, Viking hires a local guide – for our group, we had fantastic locals leading the charge, taking us throughout the cities by foot. Churches, cafes, historical buildings such as the former home of Oskar Schindler in Regensberg, or the Cathedral of St. Steven in Passau, Germany. 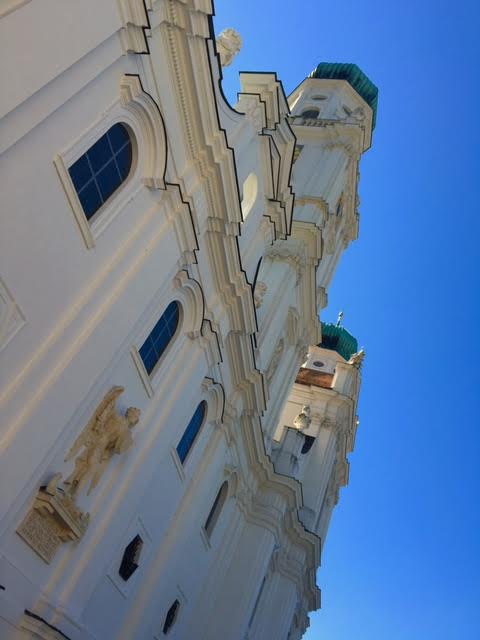 A view from below – in awe of St. Stevens in Passau. Image courtesy Susan Michals. 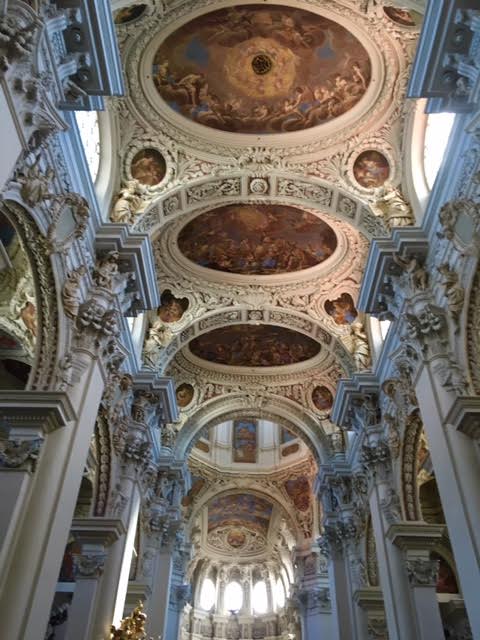 Vienna was particularly amazing as well, with a chance encounter with the Lipizzan stallions, a visit to the Hofburg Palace, formerly the home of the beautiful Empress Sisi, and the best coffee in the world, hands down. Viking took particular care to offer a myriad of daytime excursions; the only downside was that our musical foray into the world of Strauss and Mozart was not in the famed Vienna Opera House.

The question is, while the older set is gangbusters for the cruising adventure, will Millennials ultimately glom onto the idea as well? Yes and no. These adventures provide a great experiential opportunity – but there needs to be more variety for this generation as well as the next. Our trip provided a plethora of excursions, but many felt very ‘one size fits all.’ Today more than ever, people are increasingly active; added value like hikes would be wonderful additions to explore the landscape, or perhaps picnic day trips into the countryside by car or bus for those wanting something more leisurely but just as authentic. The geographical locale of passengers on these cruises run the gamut – from urban dwellers, to first timers who’ve never been out of the country (until now), to the seasoned 6+ times a year traveler – a lot of different tastes on one ship. 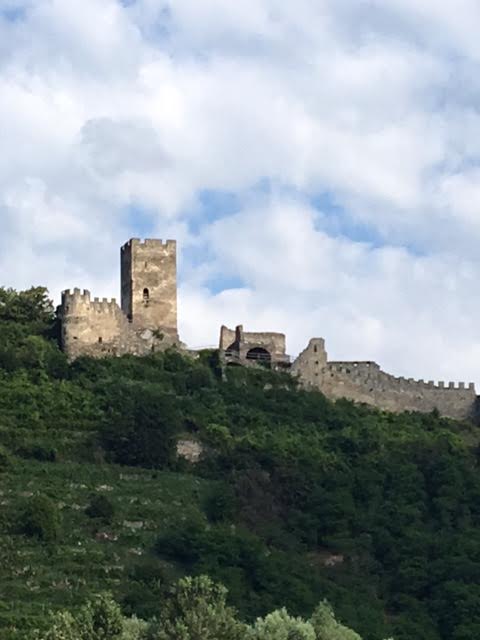 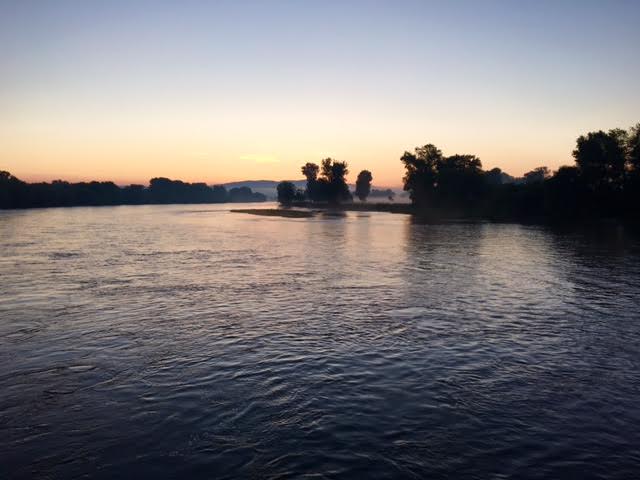 Getting back to one of the true benefits of river cruise such as these though is the all-inclusive mentality. Food, for example, can cost you a fortune overseas – and sometimes you don’t realize just how much until you get your Visa statement with the currency conversion, six weeks later. With Viking, a myriad of choices designed to fit virtually every palate and dietary challenge (they even had gluten free bread) is available. Some of the highlights include the steaks, the crab cakes, and the desserts. Ideally, more greens would be wonderful accouterment to the menu. Salads were not plentiful, but this is something that seems to be the norm in much of Europe – you don’t see many walking around with green juices, resplendently fortified with kale, cucumber, and ginger. Perhaps adding a few more salads into the proverbial culinary mix, would be a real bonus.

PROS: Impeccable, personalized service. Beautiful rooms. A good balance between smaller cities and larger ones. By the end of the trip, it was like one big happy family.

CONS: More variety in activations – a number of passengers were left wanting more. The Wifi needs an uptick. And in various ports that were crowded, other Viking ships sometimes blocked the view of the city visited.

For the latest Viking River Cruises happening this fall, (not to mention some amazing 20th-anniversary deals) click here.