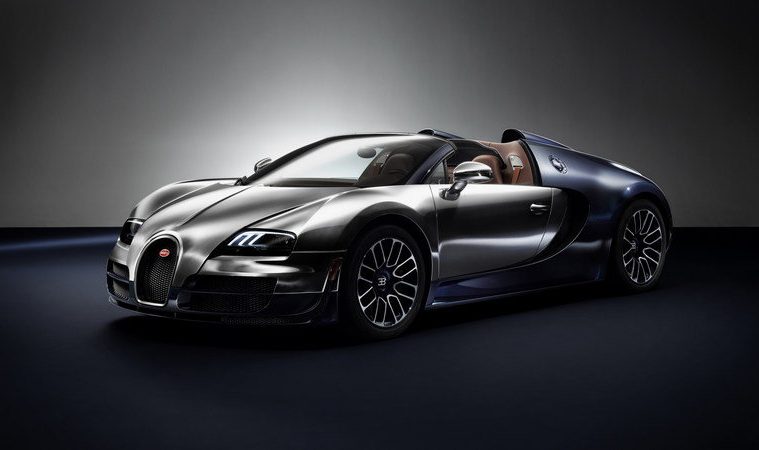 Molsheim, 18 June 2020.   The first hyper sports car of the modern era, world record breaker and icon of automotive design. When production of the Veyron began 15 years ago, Bugatti made history: as the world’s first hyper sports car, the Veyron 16.4 generates 1,001 PS, reaches speeds of 407 km/h and accelerates from 0 to 100 in 2.5 seconds. Its development is still regarded as one of the greatest technological challenges in the automotive industry. Three hundred Veyron 16.4 coupés and 150 roadsters, including very special models and editions, were produced over a 10-year period in the French town of Molsheim. Achim Anscheidt, Design Director at Bugatti, looks back on his six personal favorites.

“Looking back on the Veyron Pur Sang is like remembering the birth of your first child. You never forget such an emotional event. It burns itself deep into your memory,” explains Achim Anscheidt. “I still remember exactly how I walked through the workshop in Molsheim for the first time and how awestruck I was by the technology of the Veyron. I was immensely impressed by its technical material concept. The carbon monocoque with add-on parts for aluminum front and rear frames fascinated me. I was inspired by the beauty of it,” says Achim Anscheidt. Like discovering a person’s charm, their personality. This is what the designer wanted to project in order to create a new and different perception. Instead of using two different colors, the Pur Sang contrasts carbon and aluminum – the combination of these two materials being a first in automotive engineering. In order to highlight the technical beauty of the materials, Bugatti decided against a paint finish and reinterpreted the classic Bugatti two-tone design element in a spectacular new way. The carbon outer skin encloses the W16 engine and vehicle interior, while the light reflection of the aluminum paneling highlights the contours of the Veyron. The Pur Sang marked the beginning of Bugatti’s range of special editions and customization program. The Veyron 16.4 Pur Sang was limited to just five units and sold out within just 45 minutes during the IAA in Frankfurt in 2007. 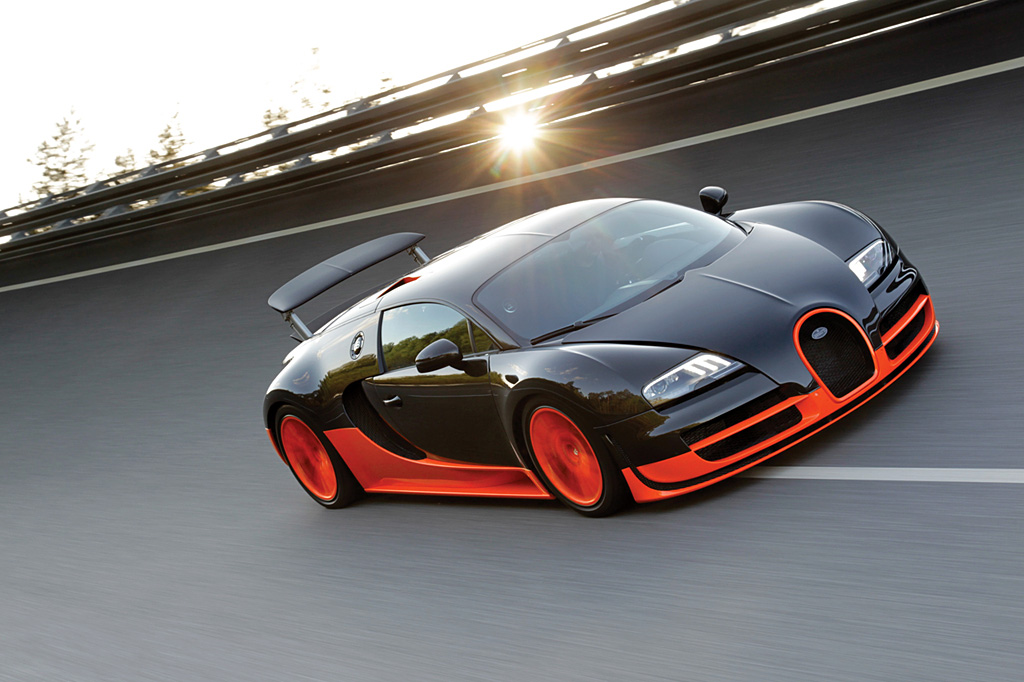 “A very special car for me is and will always be the Veyron Super Sport, which we unveiled in 2010. It was the first time that we in the design department had applied the ‘form follows performance’ approach so systematically,” explains Achim Anscheidt. Because in order to achieve our goal of breaking the world speed record for series production cars, we had to optimize the aerodynamics. A flat, elongated silhouette provides a streamlining effect, while two NACA ducts incorporated in the roof supply the powerful engine with air. Something that even many Bugatti enthusiasts still do not know to this day is that details of the roof are based on an early pre-design of the Bugatti EB110 SS, the super sports car of the 1990s.

The engine has an output of 1,200 PS, enabling the car to accelerate from 0 to 100 km/h in 2.5 seconds and to reach a top speed of 415 km/h. Under the strict conditions of Guinness World Records, the world record-breaking car achieved an average top speed of 431.072 km/h, thereby becoming the world’s fastest production super sports car. “During one of the high-speed laps on the test track in Ehra-Lessien, I was standing around 10 meters from the track when the Super Sport whizzed past. That was absolutely incredible. It’s something I’ll never forget,” says Achim Anscheidt. Bugatti put the Veyron 16.4 Super Sport on the market in July 2010. The first five “World Record Edition” models sold out immediately. 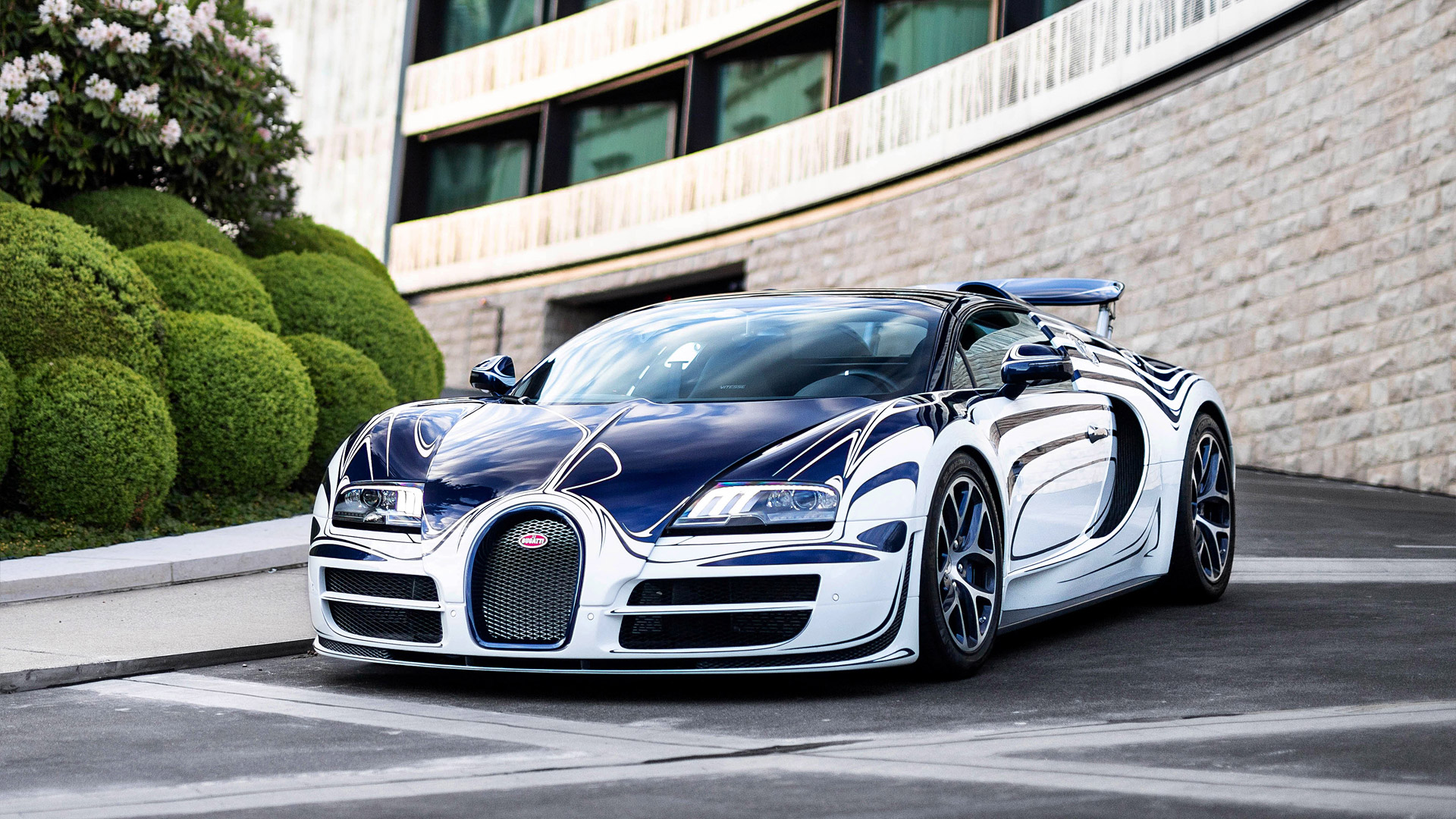 An extraordinarily interesting car was created in the summer of 2011 in collaboration with the Royal Porcelain Factory (KPM) in Berlin. The Grand Sport L’Or Blanc is one of a kind, featuring high-quality porcelain both on and inside the car – again a first in the automotive industry – and a striking, artistically abstract paint scheme. “With the L’Or Blanc, we created an extraordinary car,” says Achim Anscheidt. The idea for the car even has its own story: from early 2011, there was a desire at Bugatti to create a one-off, an art car. “I was rather skeptical of this idea at first, as I by no means wanted to emulate automotive works of art such as those by Andy Warhol, Jeff Koons, Frank Stella or Roy Lichtenstein,” explains Achim Anscheidt.

However, the idea would not leave him, and so he and his team set about finding an opportunity to create a special car that matched Bugatti’s brand values: Art, Forme and Technique. A car that also reflected the inherent characteristics of these values, such superior standards of quality and material, as well as hand craftsmanship. The designers initially projected reflections onto the surface of the car using light strips (a common process for designing surfaces). These reflections provided information about the beauty, quality and tension of the surface. This made it easier to identify proportions and patterns in the car – a magic moment.

The designers then captured the magic of these reflections by precisely applying blue strips of tape made of Japanese tissue paper onto a white painted Veyron. The team repeatedly surveyed their work, adjusting the proportions of the strips to the intervening spaces. Finally, the lines stretched over the surface of the Veyron like a network of light reflections. “The result evoked associations with a Chinese Ming vase, and that’s how we struck on the idea of collaborating with the Royal Porcelain Factory in Berlin,” explains Anscheidt. What emerged was the combination of a beautiful, fragile material and a vehicle of high technical complexity. The L’Or Blanc (“white gold”) became the fastest porcelain in the world. Paint specialists replaced the applied lines with a royal Dark Blue paint by hand, millimeter by millimeter. The one-of-a-kind car was sold to a collector. 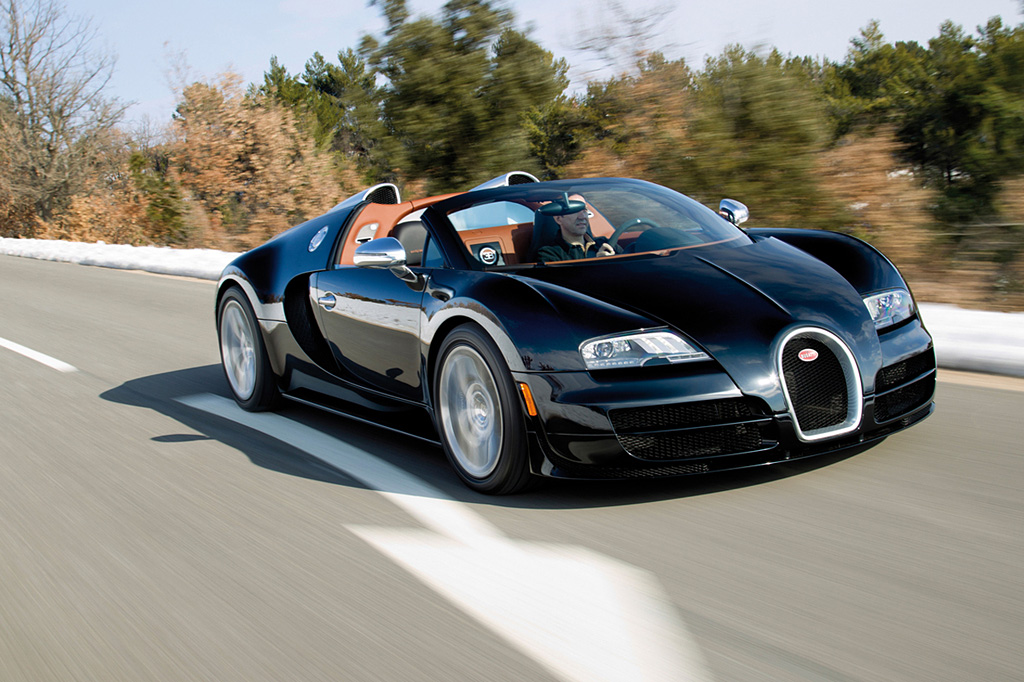 “What makes the Grand Sport Vitesse so special for me? Initially we as designers were criticized for the Vitesse not looking powerful enough as a roadster,” explains Achim Anscheidt. “But our customers appreciate the fact that it looks like a coupé when the roof is closed. And when the roof is open, they can enjoy the inimitable feel of a roadster.” With 1,200 PS. In 2013, the Grand Sport Vitesse set a new speed record for open-top sports cars, with an officially recorded speed of 408.84 km/h. The World Record Car (WRC) Edition of the Vitesse was limited to eight cars. They sold out immediately. Out of a total of 150 roadster models, 92 Vitesse cars were produced at the headquarters in Molsheim – to this day the only open-top Bugatti hyper sports cars of the modern era.

Another one-of-a-kind and an incomparable work of art was created in collaboration with the French artist and sculptor Bernar Venet. With the eponymous Veyron 16.4 Grand Sport, Bugatti created a true art object that combines mesmerizing surface design with interior design inspired by haute couture. “Developing a car with a famous artist who is in no way connected to car design can be a tricky undertaking. With Bernar Venet, it was a creative process from start to finish. It was fascinating and impressive to be able to witness how he works and how he creates large-scale sculptures. We worked closely together, and ultimately created something truly beyond compare,” explains Achim Anscheidt. The only matter on which Anscheidt and Bernar Venet did not initially agree was Venet’s idea to paint the Veyron in a color gradient from orange to brown, starting from an early stage of rusting iron all the way to heavy, brown rust. “While I understood the inspiration behind it, a sprayed-on color gradient has more in common with historic hot rods than with a Bugatti in terms of the quality and appearance,” explains Anscheidt. Together they considered how they could portray this transformation using a different concept. Bernar Venet’s enthusiasm for numbers and mathematics provided new inspiration: to depict the technical formulae used to calculate the power of the W16 engine and speed on the bodywork of the Veyron as a color gradient. The formulae radiate like an explosion from the front, over the wings and across the flanks. The rust-like color scheme of the numbers, which can also be seen in the interior, makes reference to a series of successful sculptures by Venet. “An impressive way of elegantly representing the painting process and color gradient. The result is a unique automotive sculpture, a congenial synthesis of artistic concept and technological possibility,” explains Achim Anscheidt. The Grand Sport Venet was presented to the world in December 2012 in the Rubell Family Collection during Art Basel Miami Beach and now belongs to a private collection. 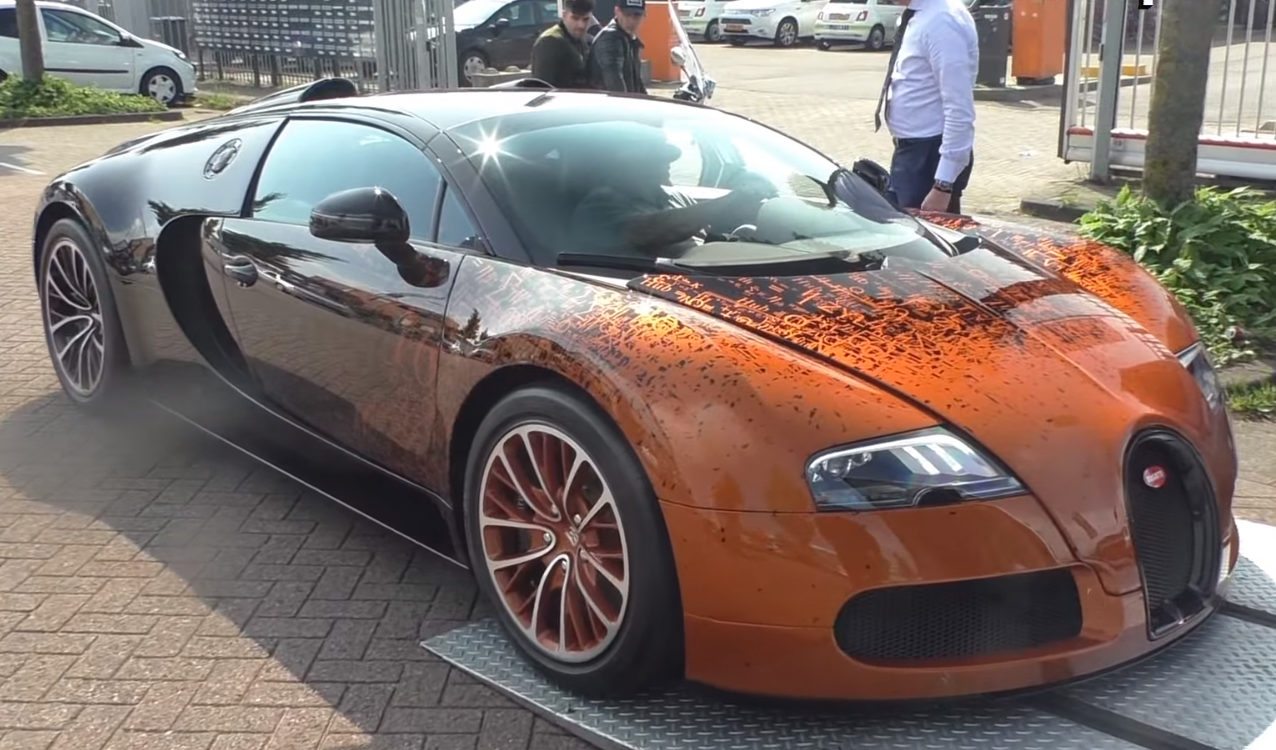 Achim Anscheidt has always been impressed by the Legends edition cars of Jean-Pierre Wimille, Jean Bugatti, Meo Costantini, Rembrandt Bugatti, Black Bess and, above all, Ettore Bugatti, all of which belong to the special edition “Les Légendes de Bugatti.” “With bodywork consisting of dark blue exposed carbon and hand-polished aluminum, and an interior featuring soft, natural cordovan leather, the sixth and final edition of the model range based on the Veyron 16.4 Grand Sport Vitesse is spectacular. “Anyone who has ever owned a pair of shoes made from this material will understand the remarkable quality of cordovan leather and appreciate its durability. This was precisely our starting point when we created the interior of this Legend,” explains Achim Anscheidt. All 18 units of the six-part edition sold out immediately.

“We hope that one day, perhaps even at the Concours d’Elegance in Pebble Beach, the grandchildren of the current owners will sit inside the Ettore Bugatti Legend car and begin to reflect on the beauty of the materials, their aesthetic appeal, and the fact that this car offers value and quality beyond the normal lifespan of an automobile. That is precisely what a Bugatti is, and what it will always embody,” says Achim Anscheidt.

He has now worked for some 25 years in the field of automobile design and held positions such as Head of Advanced Design with the Volkswagen Group in Barcelona and later at the Potsdam Design Center.

Achim Anscheidt studied automobile design at the College of Art in Pforzheim, as well as the Art Center College of Design in Pasadena, California, USA. After completing his studies, he started his career in 1993 with Porsche AG at the styling center in Weissach, before joining the Volkswagen Group in 1996.

Achim Anscheidt was born in Stuttgart, where he also grew up, on July 30, 1962. He is the father of three daughters and lives in Berlin where he pursues cultural interests, especially in the fields of art, design and creativity, in his leisure time.

As the son of three-time world champion motorcycle racer Hans Georg Anscheidt, he was successful himself in the demanding discipline of motorcycle trials riding, distinguished as a German junior champion. Now he spends part of his spare time on his customized classic Porsche 911.