Visiting the Emperor Suite at the Mandarin Oriental gave me much to ponder in terms of cultural difference and similarity to the other suites I have stayed in and toured.  First, this suite (and all the Mandarin Oriental suites, no matter the season) start at $15,000 a night. A quite reasonable price, actually, for a high end suite. 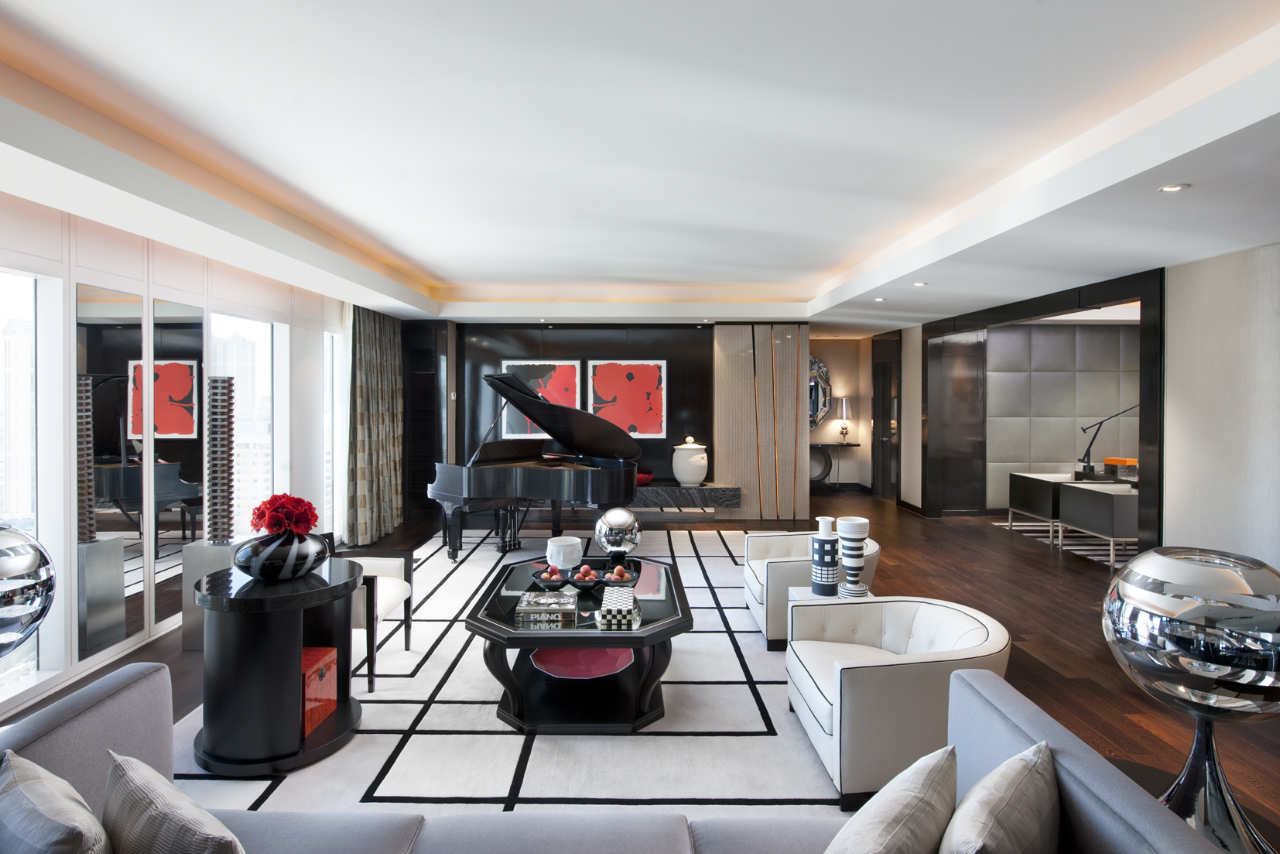 There are two elevators to this Suite, one for the guest, and one for the butler. And the Suite, on one floor and is approximately 3,000 square feet with one master bedroom, and there’s an additional room that can become a second bedroom. This Suite, in contrast to the others, is often used for intimate parties or gatherings, as the kitchen is large, and the living areas flowed easily from the kitchen. And, in the corner, there’s a Steinway Baby Grand Piano.

It is important to note that DNA of the Mandarin Oriental Las Vegas is very different from the other high-end Las Vegas hotels nearby. The MOLA (the acronym for the hotel’s name) is non-gaming and non-smoking, so the many who come here are either business people who don’t care for the typical Las Vegas play/gamble component, or are basic sanctuarians – people who enjoy daytime Las Vegas but at the end of the day like peace and quiet, and some of the best Sushi in town.

Because of absence of smoking and gaming, the Mandarin Oriental is more of an urban hotel sanctuary, where the Lobby is on the 23rd, not the first floor, and the corridors have a light scent of bamboo and rain, an Aromatherapy component whose goal is to refresh and lighten guests’ moods. And this scent sense is carried into the Emperor Suite. Upon entering, I was surprised by the black, red and white living area interiors, designed by the renowned interior designer, Adam Tihany. The colors of the living room were, in daylight, those of a bright, lacquered Bento Box, but later in the day, with a softened twilight, the colors muted into more nuanced tones. And in the corner of the living area was a Steinway Baby Grand Piano. 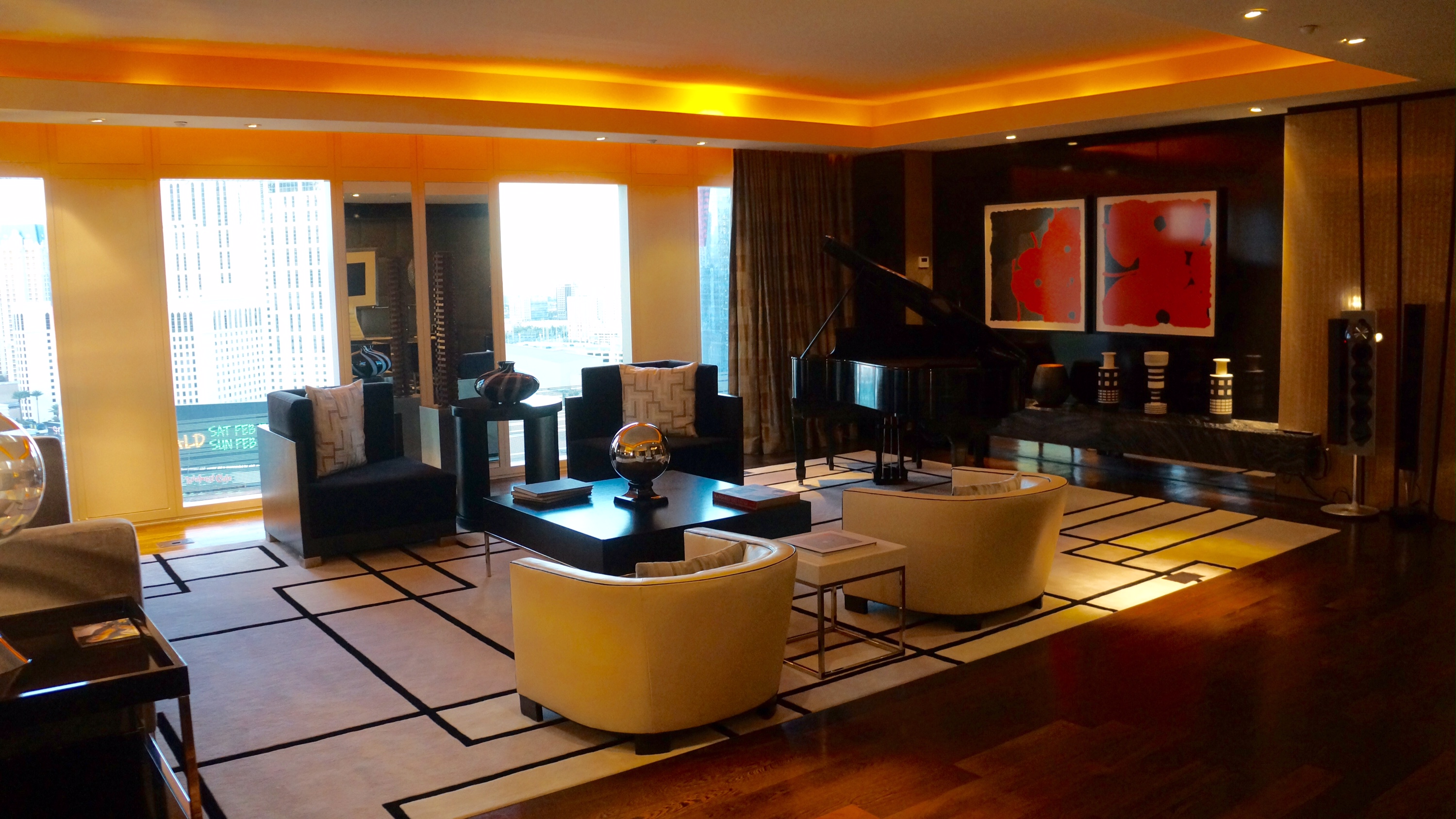 The grey marble full kitchen, adjacent the living area, and was of an open design, so the private chef or Sushi chef could be called to make private meals, without disturbing the guests. Should they want a fresh daily selection of sushi, sashimi or nigiri, any time of day, the MOzen Bistro is a few floors away and does room service. 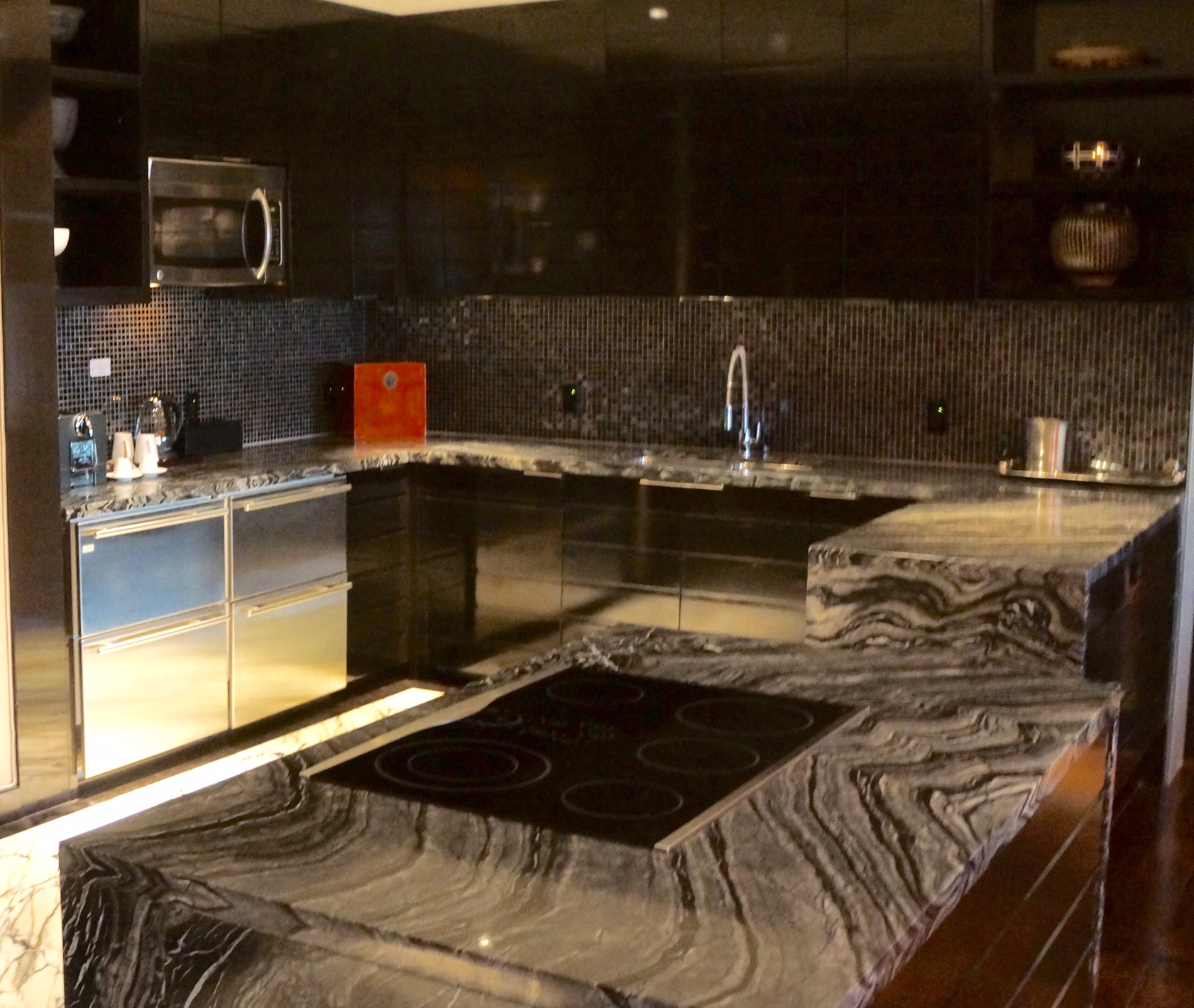 The dining room seats eight and right next to it, beyond the unique Bubble Wall, a wall made of glass bubbles instead of curtains or concrete, is the media room that has been used for private film screenings on the huge flat screen TV by Bang & Olafsen. 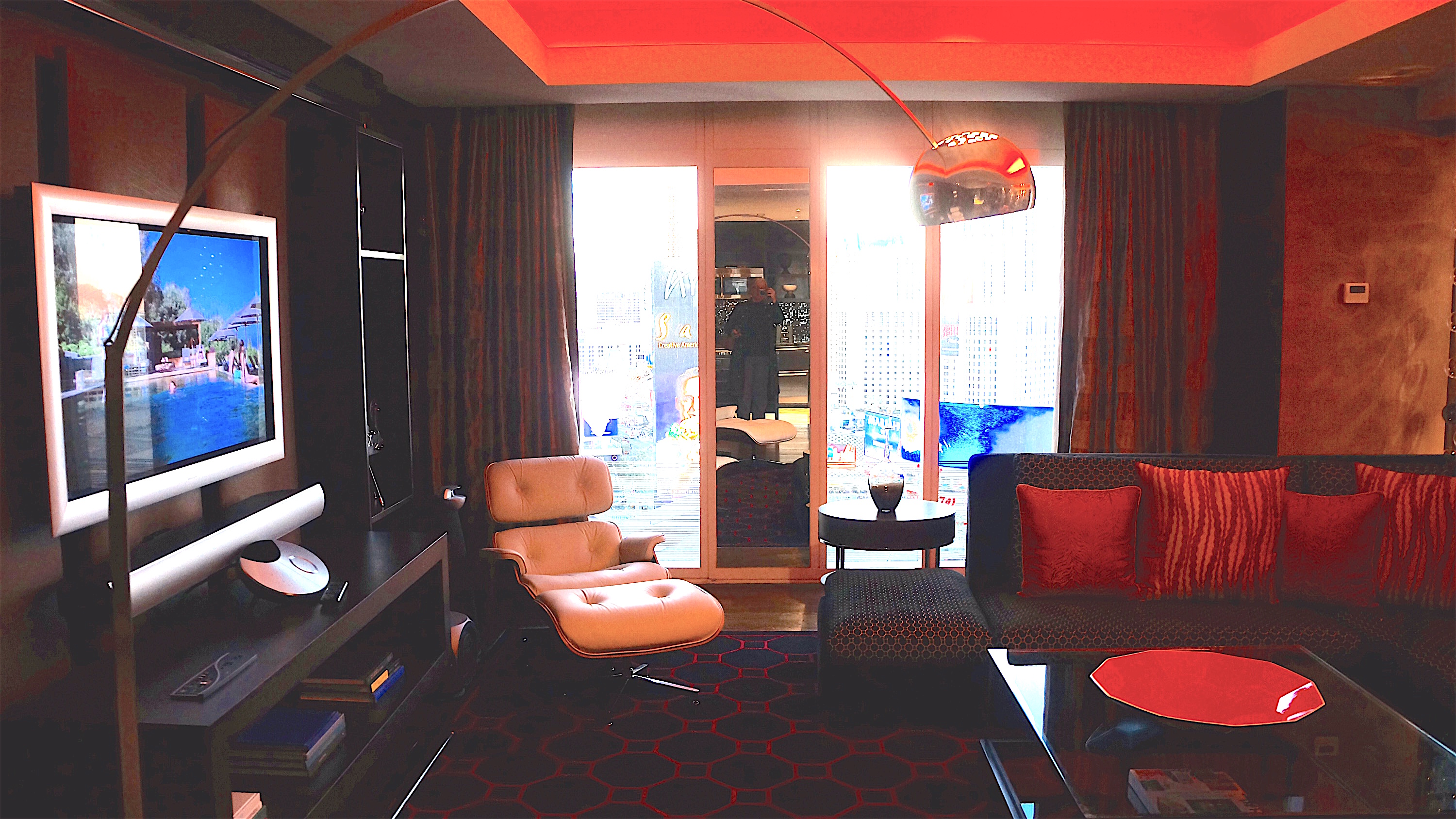 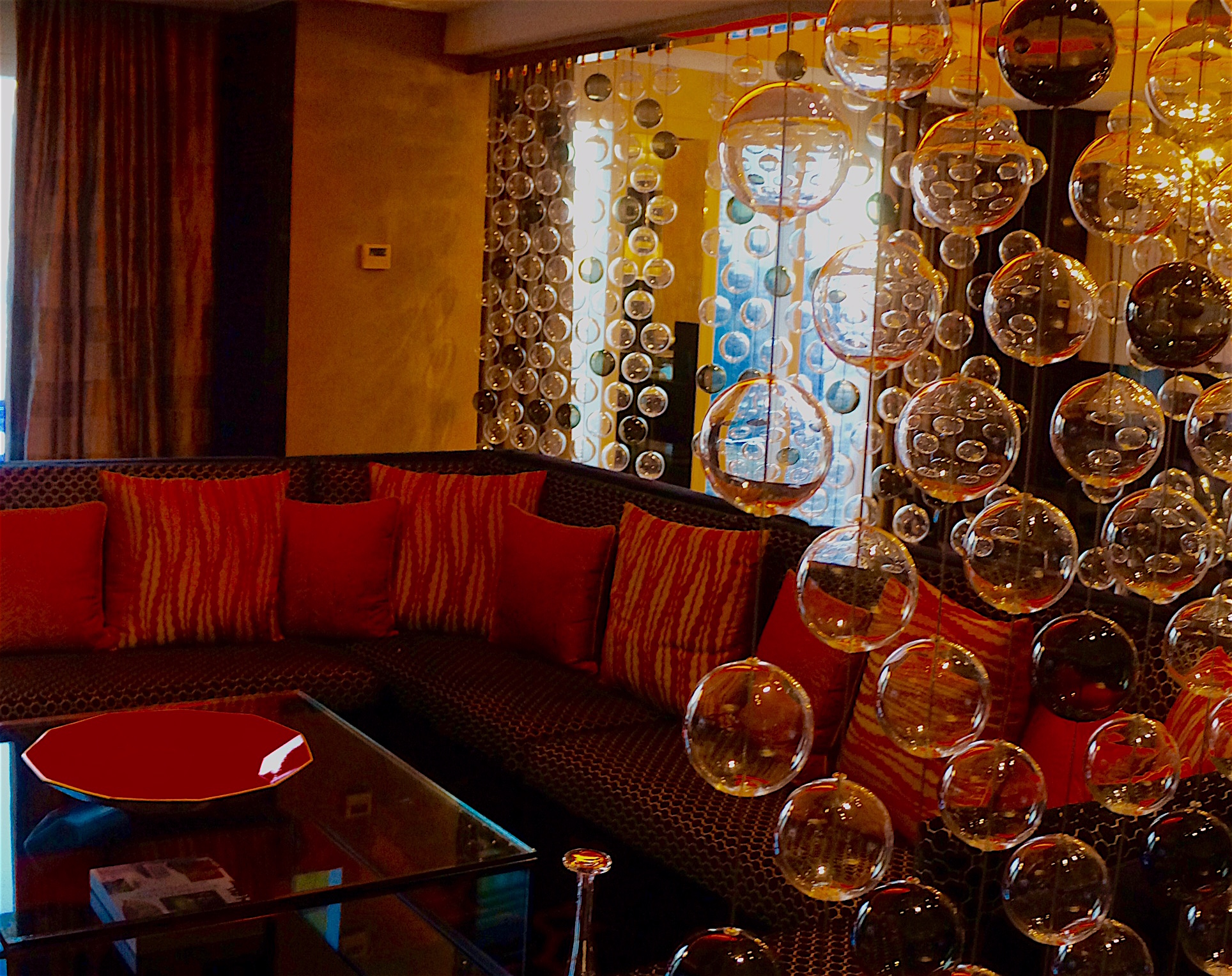 The black marble bathroom, adjoins the master bedroom. The amenities are by Shanghai Tang. The shower has a steam dimension, so a steam shower is another cleansing possibility. But the Jacuzzi tub is, in my opinion, the main event. It has a color component that can color the water with different tints. The Jacuzzi bubbles become changing colors, the experience mesmerizing. 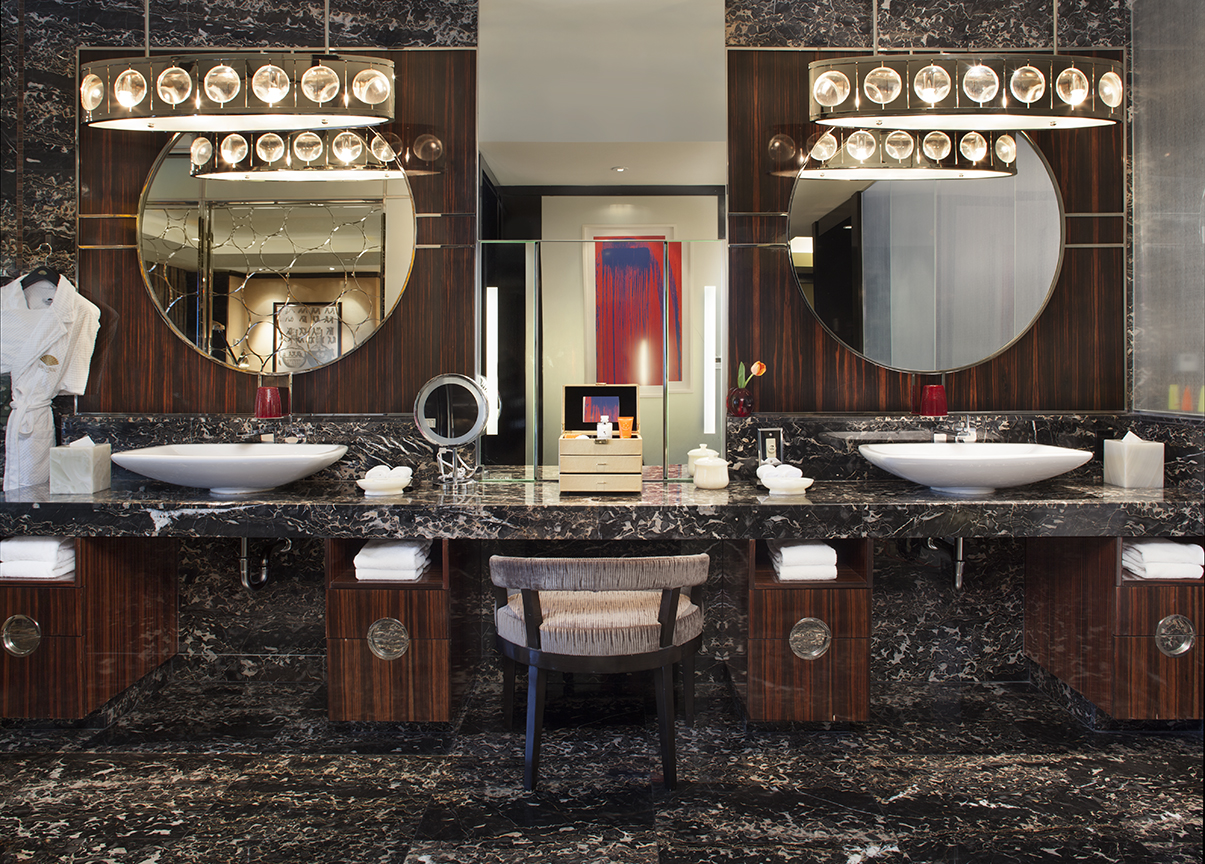 And while on the subject of wellness and relaxation, one of the Emperor Suite amenities is the complimentary use of the Tian Quan Thermal and water experience at the MOLA Spa. 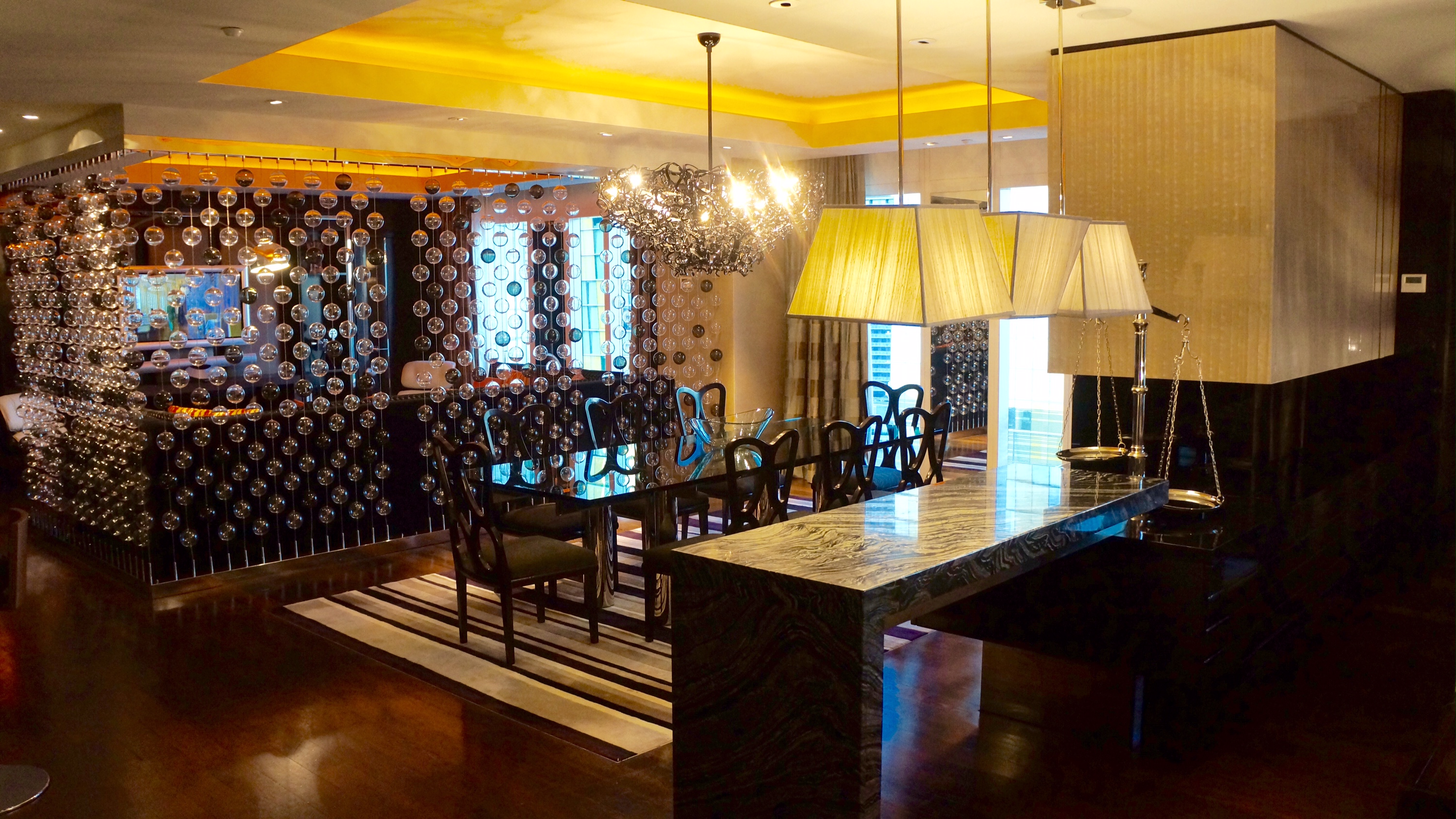 I enjoyed the herbal steam room, and the Experience Showers, called that because they offer cool and warm water options, with different lights, scents and sounds. There is also the ice fountain, a vitality pool, Tepedarium (warming) chairs, and a relaxation lounge. 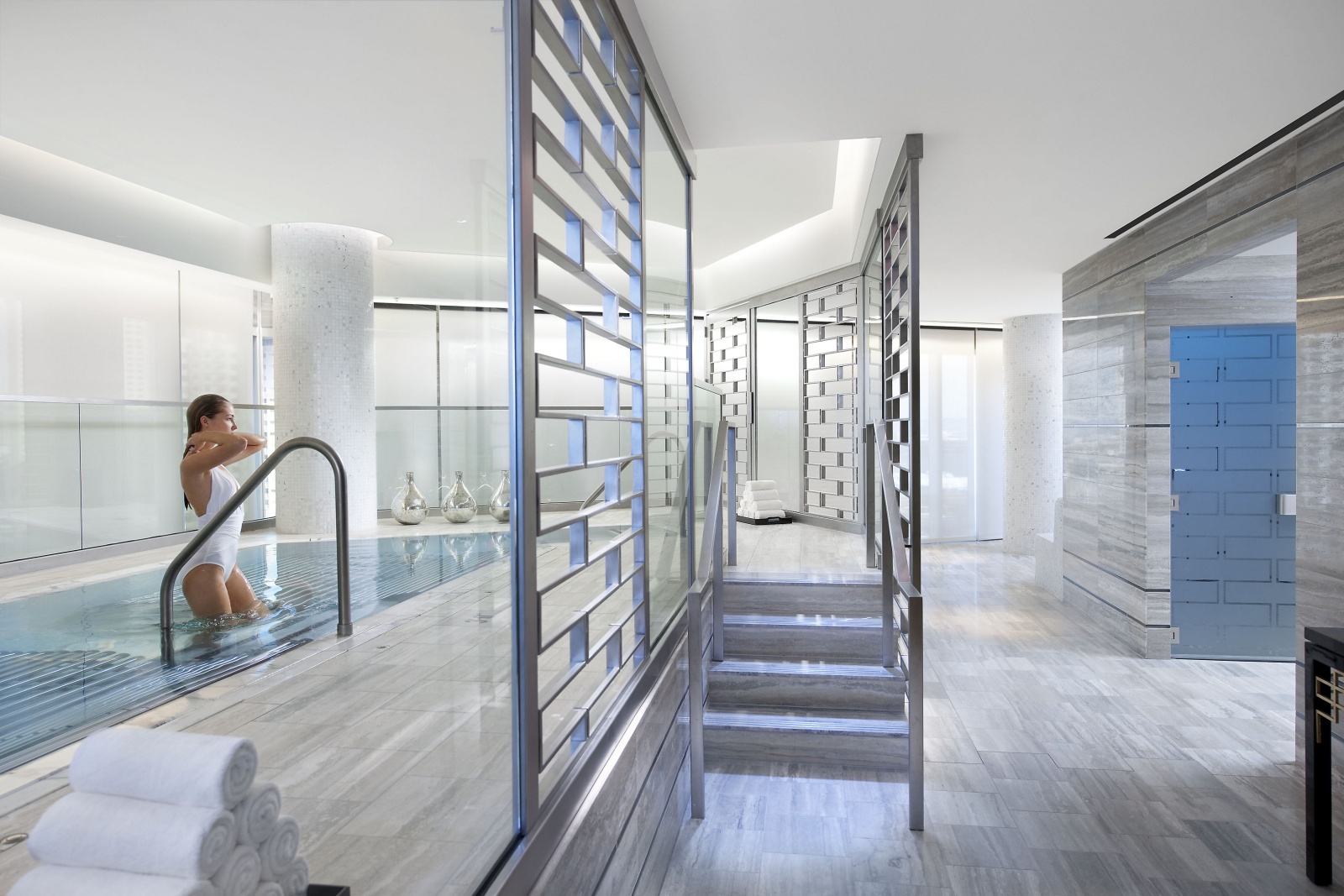 The sense of the Emperor Suite was different from other suites I have stayed in. Though not as grandiose and amenity-laden as many others, there was something else, nuanced and ethereal: a sense of equipoise and balance well-defined by its use of space, lack of tchotchkes, and the simple, deep comfort of its furnishings.

And one other thing: not often mentioned except for those of us who play the piano, the Steinway Baby Grand as mentioned above, was well tuned and ready to play. I have been in suites before, where there were baby grands, and even one concert grand, but all were out of tune.  However,  this in-tune piano symbolized a more general Mandarin Oriental attunement; not only of color, scent and balance, but also of expectation: altogether combined in what I hoped for and certainly received from a suite at this level. 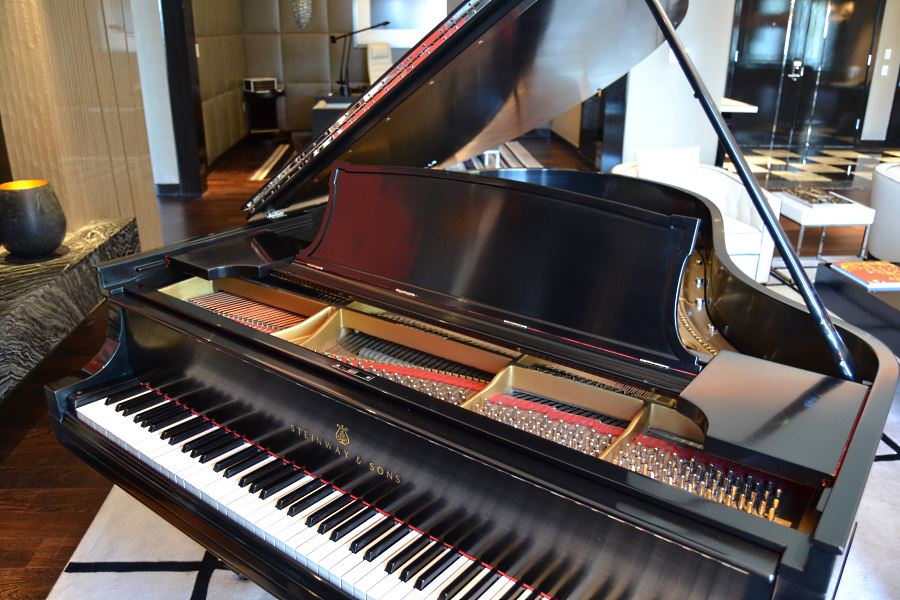