SOME OF THE MOST EXPENSIVE PENTHOUSES IN THE WORLD.

The prices for luxury apartments in city centers are soaring, and so too are their locations.

Property developers around the world are wooing mega-wealthy buyers with lavishly appointed skyscrapers in the most prestigious of neighborhoods, where large-scale lateral square footage is nearly impossible to find, according to a recent article in Wealth-X.

“Flagship developments provide services and facilities such as spas, wellness and restaurants that you wouldn’t normally get in a house, all within walking distance to the city’s restaurants and culture instead of being out in the sticks.”

These trophy residences are being designed by top architects and interior designers, and have the added benefit of being zero-maintenance, turnkey properties.

This type of apartment is easier on the rent and resale market too, said Edward de Mallet Morgan, head of super prime international property at Knight Frank. “More owners are renting out their properties where there is a good management, rental service or a concierge, as it is nice to have some income being generated to put towards annual running costs,” he said.

Following is the Top 10 most expensive luxury penthouses on the world, and the developers behind them.

Located on East 23rd Street in Manhattan, this slim 60-story glass tower already has some celebrity residents, including Tom Brady and Giselle Bündchen. Soon, they’ll be bumping in to Rupert Murdoch, who spent $57 million buying the top four floors of the building after he combined the triplex penthouse and the apartment below. One Madison has 53 units with amenities such as an indoor pool with marble walls and butler service.

Designed by Pritzker Prize-winning Iraqi-British architect Zaha Hadid, this building at 1000 Biscayne Boulevard is billed as “creating a six star lifestyle.” Amenities include two floors of wellness and spa facilities, a sunbathing terrace overlooking the Miami skyline and a private helipad. All the interior spaces have customized “building scenting,” with perfumes designed by olfactory consultants 12.29. Developed by Gregg Covin and Louis Birdman, the building is due to be completed in 2018.

Clermont Residence is perched atop the 951-foot-high Tanjong Pagar Centre, Singapore’s tallest building. Skidmore, Owings and Merrill designed the building, which is due for completion in 2016. There will be 180 apartments, including the 14,500-square-foot penthouse with its own private elevator. Residents of the Peck Seah Street building will be able to step out into Singapore’s prestigious Central Business District. The project is being run by Guocoland, the developer owned by Malaysian billionaire Quek Leng Chan. This Herzog & de Meuron-designed tower in Tribeca is almost entirely made from cantilevered glass, offering city views through floor-to-ceiling windows. The penthouse is under contract for $47 million, making it one of the most expensive residences ever to be sold in downtown Manhattan. An Anish Kapoor sculpture sits at the base of the building; inside there is a 25-seat cinema and a 75-foot lap pool.

Pritzker-winning Canadian architect Frank Gehry designed the 12-story Opus development, his first residential project in Asia. Located at the exclusive 53 Stubbs Road on the Peak, the building’s eighth floor apartment has already broken records as the most expensive ever sold in the city. Amenities include rainwater recycling for irrigation and electric car charge systems. However, the project has been temporarily derailed by the Hong Kong administration’s property-cooling measures introduced last year, including strict requirements on sales of first-hand property. For now, Opus is available only to rent.

At more than 550 feet, Tour Odéon will be the tallest building in Monaco, overlooking the entire principality and the Mediterranean sea. The double tower, due for completion in the next few weeks, includes 70 luxury apartments with floor-to-ceiling windows. ArchitectAlexandre Giraldi and Monegasque family-run developer Groupe Marzocco collaborated on the creation of the landmark, bringing in designer Alberto Pinto for the interiors and Jean Mus to create the gardens. The 35,500 square feet “Sky Penthouse” will occupy the top five floors of the building. Although the price of the penthouse has yet to be revealed, reports put it as high as $387 million, which would make it the most expensive apartment in the world.

South Bank Tower was originally a 30-story structure designed by Sir Richard Seifert in 1972. Developer CIT recently acquired the building, and brought in Kohn Pedersen Fox Associatesto redesign it, with interior design from Johnson Naylor. They have transformed the building into a 41-story offering of 191 luxury apartments and office space. Due for completion in 2015, the building is on the River Thames, and overlooks the London Eye and the city beyond. The penthouse will be a triplex with two roof terraces. 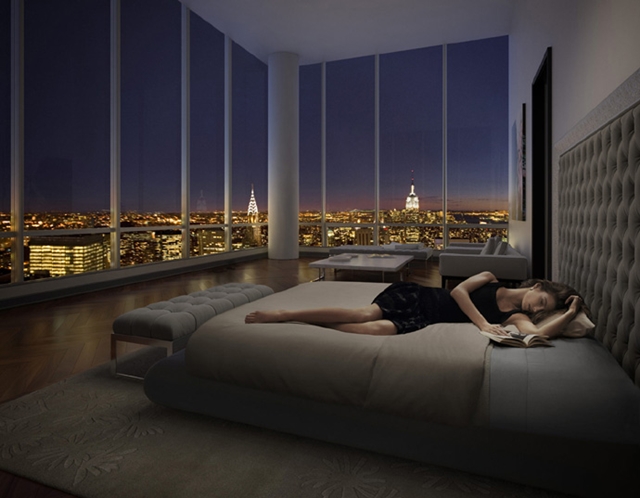 Rising 1,004 feet over Midtown Manhattan on 57th Street, this development is the tallest residential building in New York. Developed by Gary Barnett’s Extell, it claims to be a vertical billionaire’s row. There are 95 condos with amenities that include a yoga studio, an arts-and-crafts atelier room and a pet grooming room. French Pritzker Prize-winning architect Christian de Portzamparc envisioned the project, while Thomas Juul-Hansen did the interiors. The flagship Park Hyatt New York and its health club and spa at the base of the building will open this summer, designed by interior designers Yabu Pushelburg. A Midtown Manhattan neighbor of One57, 432 Park Avenue is the brainchild of property tycoon Harry Macklowe. It was designed by architect Rafael Viñoly, with interiors byDeborah Berke. Due for completion in 2015, it will be the second tallest residential building in New York. The residents-only restaurant is designed by Bentel & Bentel, and will have an adjacent outdoor terrace above 57th street to accommodate 300 guests. The penthouse will have six bedrooms, seven bathrooms and a library. Other amenities include a wine cellar, a 75-foot indoor swimming pool and a spa and fitness center.

The signature development of the Candy brothers, One Hyde Park, though not a skyscraper, is probably London’s most hotly-discussed residential building, according to Wealth-X. The building’s interior designer Candy & Candy says the penthouse sold for $227 million, while other reports have suggested the actual price was lower. Christian Candy is listed as an owner, along with Qatari financial backer Sheik Hamad bin Jassim bin Jaber Al Thani. Amenities include a golf-simulator, private cinema and squash court. Roger Stirk Harbour + Partners provided the architectural design, and Mandarin Oriental Hotel group runs the concierge.