THE NAPA EXPERIENCE – IN VINO VERITAS: IN WINE THERE IS TRUTH.

Napa Valley is known for its lush land, its fantastic food, and of course, some of the world’s greatest wine. With towns such as Northern California’s well-known Yountville, the City of Napa offers a culture rich with history–bountiful in beauty and bustling with excitement.

Destination Luxury spent a weekend getting to know the landscape, and had the pleasure of speaking with some of cities most outstanding vintners. We were chauffeured in BMW’s and Mercedes Sprinter Limos through the picturesque sceneries of Napa by Beau Wine Tours. It was fun sipping on JCB sparkling wine as we cruised from vineyard to vineyard. 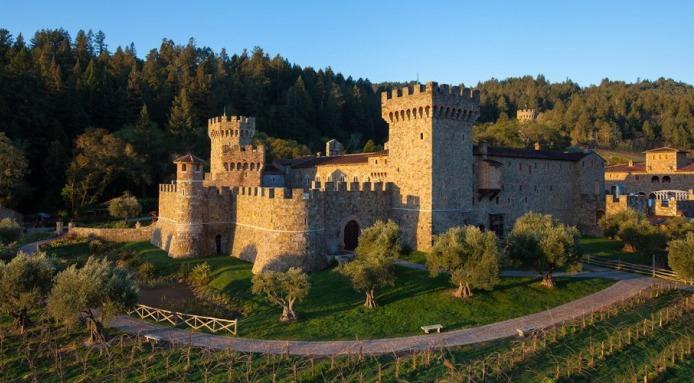 Nestled deep in the lavish countryside, you’ll find the exquisite Castello di Amorosa. This Tuscan-inspired castle mirrors the architecture of the 13th-century and has an abundance of exclusive wines to choose from. Built by Dario Sattui, the land was first purchased over 20 years ago. The 4th-generation Italian winemaker sought to re-create the allure he found throughout Italy and most of Europe, and thus, a fairy tale was born. The wine cellar, which houses bottles from the early-1900s, is just a taste of this whimsical experience as it also offers a Terrace, The Courtyard, the Royal Apartment, the Il Passito Room, a Chapel, the Grand Barrel Room, and the Great Hall.

The sheer beauty of the artwork you’ll find in the Great Hall tells a deeper story – as one side of the room is painted as an allegory and the other depicts a story of peace, set in Siena, Italy. For an even more authentic representation, the castle comes complete with its very own torture chamber and grand drawbridge entrance. From a small winery to a capacious dream that now rests over 136,000 square feet, Castello di Amorosa is quite a popular destination for people to visit from all over the world. In fact, you may even recognize its grand display from Season 14 of “The Bachelor” as a place you’d want to spend a dream date with the eligible, Jake Pavelka.

Here, it’s possible you will find your own knight in shining armor as you wander through the grounds, reveling in the glory of the different architectural styles that represent every time period from the eighth to the 15thcentury. This stop is a must-see for anybody exploring Napa who wishes to turn their fantasy into a reality. 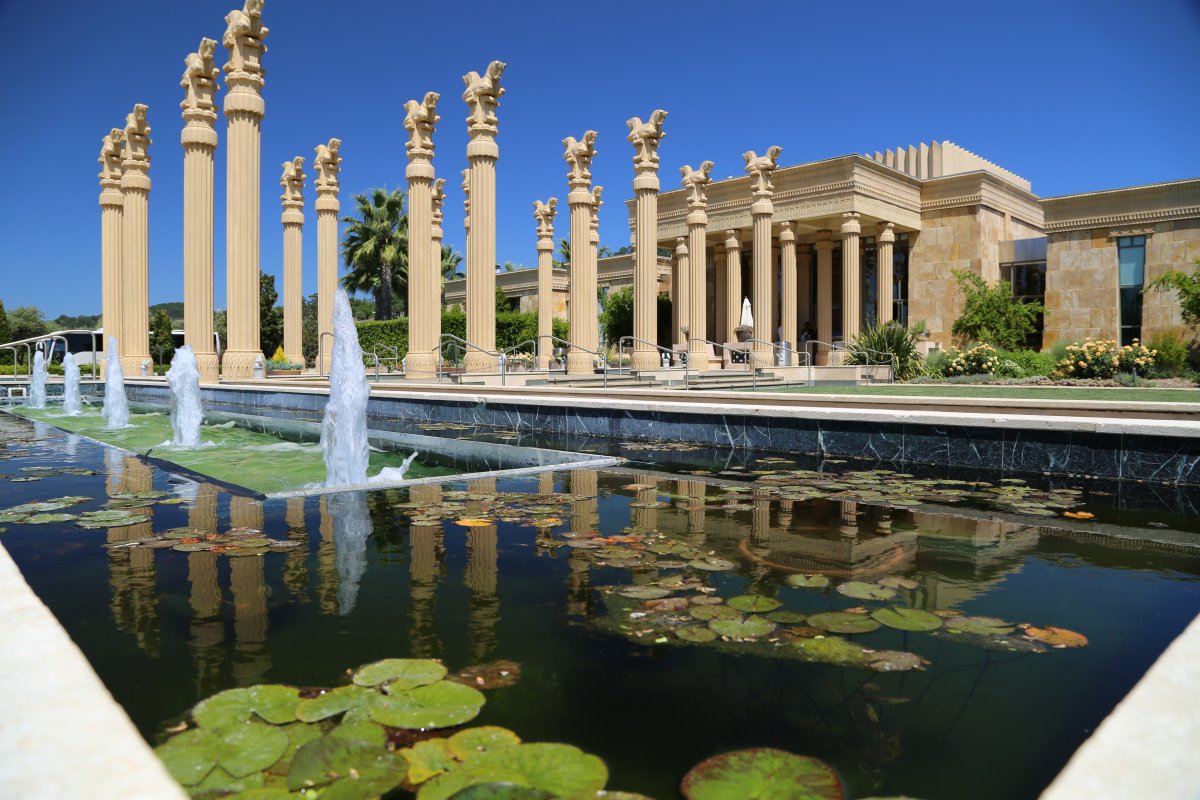 The magnificence that is Darioush Winery. Photo courtesy of Darioush.

Darioush Winery invited us on an exclusive tour and tasting. When Darioush Khaledi first came to Napa in 1997, he was very specific on what he was looking for to start his winery in terms of vineyards. Southern Napa gave Darioush the land he needed to forge his own path and the opportunity to plant his roots and watch them grow. He knew he wanted to make a Bordeaux style of wine and he also knew that Southern Napa was going to have the closest microclimate to deliver that more than any other place in Napa. Being about 9 miles from the Pacific Ocean brings in those cool ocean breezes in the evening which is what the grapes really seem to love.

Jodie MacKenzie, who has been in the wine industry for 16 years and works with Darioush explained, “This is a very special estate. Having visited many wine estates around the world, I recognized that Darioush really is a standalone winery in terms of giving people a 360 experience. It’s not just about the wine tasting, or just about having spectacular wines, it’s about hospitality and friendship.”

An exquisite food and wine tasting at Darioush.

The vineyard itself is home to Darioush, and also offers up experiences to its guests for some extremely special events. A year’s worth of preparation or more can go into one of these events, for instance; say their intimate amphitheater. Fitting about 180 people, the winery offers private performances there followed by dinner on the lawn. During Festival, which is probably the largest single event that is held in Napa ever year, you can have anything from the Bolshoi Ballet there to the New York Symphony.

The Amphitheater of Darioush

Founded by Darioush, Festival has grown to encompass 10 days in July and is a giant celebration of culture and life. About 100 wineries participate as a collection of creative artists descend upon Napa, and from sunup to sundown, you’ll find all sorts of activities going on in the Valley. Darioush is open to the general public during the week while offering elevated programs by reservation only. DLX highly recommends when visiting this vineyard, trying the Darius II. Not only is its distinct deliciousness something you will never forget, but each vintage label bears a rich example of historical Persian art. Every time you visit Darioush, the experience will have you feeling right at home. 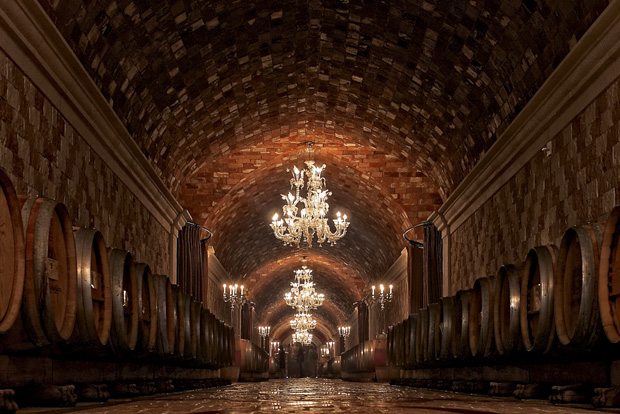 Like a fine wine spa, Del Dotto Vineyards delivers you some good music and perfectly pairs it with the most delightfully vibrant atmosphere. Their savory selection of wine comes from the Del Dotto family having spent the last 20 years acquiring vineyards all over Napa Valley in the top areas for growing world class wines: including Rutherford, Oakville, St. Helena, Spring Mountain, Howell Mountain, Pritchard Hill area and Sonoma Coast.

They have a larger variety of oaks more so than any other winery in the world. DLX had the pleasure of speaking with the founder, Dave Del Dotto, to find out more about this incredible family venture. Dave’s mission was to bring the history of his own family to Napa, seeing that his Italian heritage can be traced all the way back to the Venetians in 1103. His family had moved to Lucca, Italy, in the 1400s, until finally his Grandfather immigrated to the United States via Ellis Island in 1898.

Taste wine in the caves of Del Dotto.

Dave Del Dotto originally came to Napa as a collector and bought the property back in 1988. Right out of the gate, Dave said he knew he was onto something. Perhaps one of the most beautiful things about drinking wine from Del Dotto is that it has the ability to turn non-wine drinkers, into not only wine lovers, but also Platinum members. When you step into Del Dotto, it’s possible you’ll go in for a taste and leave with a case. Dave’s outlook focuses on the spirituality and the beauty of wine, as well as its healing capabilities.

Drink wine straight from the barrel.

To honor that credence, with the help of a spectacular designer from Florence, the impressive presentation at Del Dotto consists of 135 year old marble, Tuscan and Venetian-inspired designs, as well as some incredibly detailed artwork. If you look closely, throughout the cave you’ll even find the history of wine in the tiles. All in all, Del Dotto will leave you feeling nearly ethereal. As Dave pointed out, today, wine is part of our daily lives. With over 3,000 compounds, it’s truly one of the most complex things on the planet earth. When you fuse together elaborate architecture, enjoyable music and flavorsome spirits, you create an ambience that is the ultimate experience. And that experience – is Del Dotto. Dave has now passed the business onto his children, Desiree and Giovanni, which ensures that this is one family tradition that is guaranteed to continue. 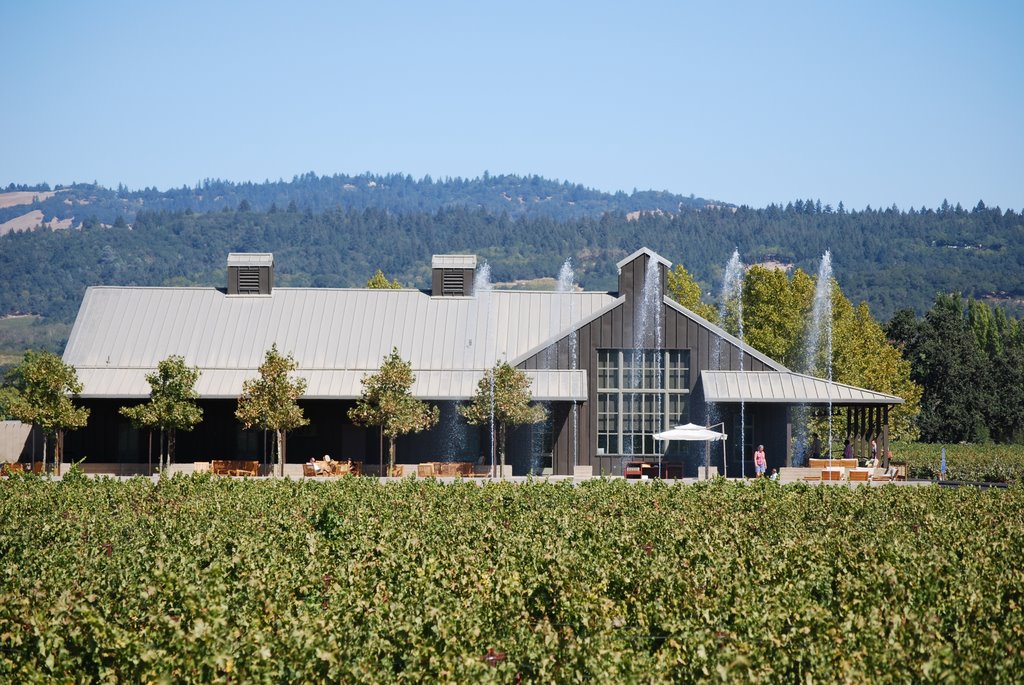 The majestic Alpha Omega Winery is located in the heart of Napa Valley and farms its choice grapes from its own vineyards as well as from other vineyards such as Beckstoffer’s To Kalon and Missouri Hopper in Oakville, Dr. Crane and Las Piedras in St. Helena, Georges III in Rutherford, Stagecoach in Atlas Peak and Sunshine Valley in Oak Knoll District. Its celebrated winemaking team consists of Jean Hoefliger and Michel Rolland, whose expertise not only helps produce some of the most delicious wines in Napa Valley but has also helped earn Alpha Omega the reputation as one of the most highly regarded wineries in the nation.

Destination Luxury had the wonderful pleasure of spending the afternoon with vintners, Robin and Michelle Baggett, who first came to Napa Valley in 2006. After working together in San Luis Obispo, the two forged a professional bond, but if you’d hear Robin explain it he’ll tell you, “It was love at first sight.” Between Michelle’s background in marketing and Robin’s background in law, the couple’s strengths found a perfect path with the one Robin started in 1998, when he began his career as a grape grower.

Wine was the love connection that would begin a beautiful journey for the couple and would help to grow more than just grapes. Building this winery, Michelle says “has been a project of the heart from the very beginning.” They recently celebrated their 10-year ‘wine-aversary’ with the vineyard, so everything you find on the grounds is relatively new. And, with the soaring popularity of the high end luxury private tastings they offer, the experience has been so well-received they’re now creating new luxury tasting rooms and experiences to add to the Alpha Omega enterprise.

Exploring the vineyards while you’re tasting, and to be able to look at the vines firsthand, gives those who visit the ability to truly enjoy what goes into the glass. Their flagship wine, ERA, is truly the best of the best. Just as its name would imply, Alpha Omega brings together the old and the new, working together to usher in the current generation of wines. The couple also brings their uniqueness into what they do for the community as well. Michelle is President of the Rutherford Dust Society, Board member of the St. Helena Hospital Foundation and Founding Board member of the Napa Valley Film Festival. Robin is a board member of the Wine Institute, Festival del Sole, First Tee of Monterey and Cal Poly’s Athletic Director’s Council.

They were honored in 2011 by the V Foundation as Vintner Grant Recipients. Robin was also just elected to the board of the Napa Valley Vintners, which does Auction Napa Valley – the largest lifestyle auction in the world. Last year over a period of two days the auction brought in a total of 16 million dollars. 100 percent of the proceeds go to charity. On top of recently going solar they’ve also acquired two new vineyards. From the best grapes, to the best equipment, to the best barrels, to the most soul, Alpha Omega is Napa’s true love story.

Michelle spoke about her own appreciation for Napa and told DLX, “This is a wonderful neighborhood. The vintner community is a family community.  We all support each other and help each other out in every way we can.”

The city itself has a population of about 80,000. As a small treasured community where everyone shares, it’s understandable the kind of attention it gets from people all over the world. Even though the season typically winds down towards the end of November, Michelle noted that Napa is quickly becoming a year-round hotspot.

Recommendations are to book reservations two months in advance or more for every winery. And be sure to make restaurant reservations in places like Yountville which is a popular attraction for visitors who come to Napa Valley.

While in the area, DLX had the wonderful opportunity to dine at Bottega in Yountville and St. Helena Bistro in St. Helena. We were treated to an incredible Vietnamese French Cuisine at Bui’s Bistro by chef/owner Patrick Bui, who surprised us with a divine selection of amazing appetizers. And Curtis Hecker provided DLX with the most mouthwatering paella you could imagine. Hecker works with Kerr Cellars/Curvature Wines. Created by golf star Cristie Kerr, each vintage is handcrafted by winemaker Helen Kiplinger. Curvature includes founder Suzanne Pride Bryan, and winemaker Sally Johnson, who know how to make the perfect blend of pride and quality.