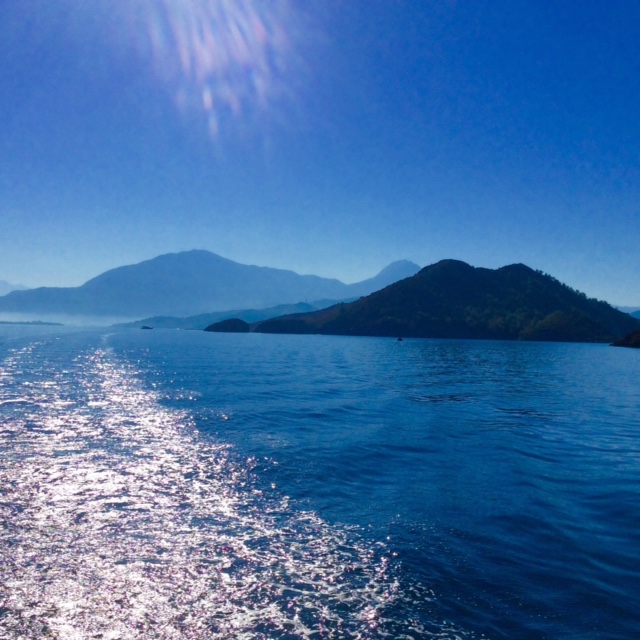 Expectations  exist when people take luxury cruises, but to places traveled before, expectations become hopes. We hope to be shown something new in destinations we knew before. And being on AZAMARA, my hopes were satisfied, as I experienced new dimensions of the familiar, and learned new things about my well-known destinations. 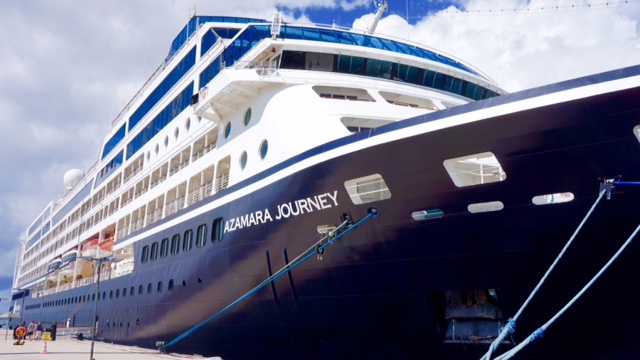 Our journey took down the Turquoise Coast, from Piraeus, Greece, through historic ports and islands in Greece and Turkey, to Santorini, Greece and back. I had been to many of these islands before, but years ago. And, those trips were rushed. This AZAMARA cruise was anything but rushed. I was rested, the AZAMARA food was exceptional, and we left for shore at decent hours, not 6:30AM. 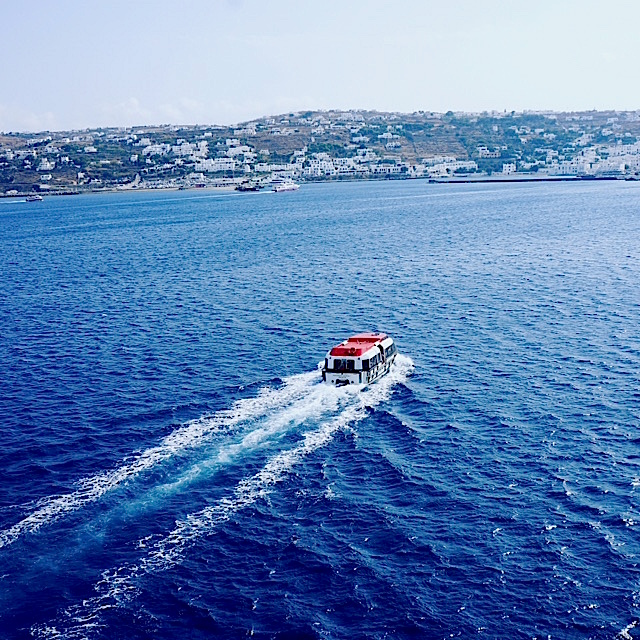 Our Red Tender On The To a New Adventure

Perhaps this was this reason why I felt so attuned to the sense of movement from past to present,  creating the best a travel experience can offer: a sense of time’s absence, and in its place, a sense of the greater fullness of the present that combines ancient with modern. On this Turquoise Coast trip, I had four experiences where I touched the past with my hand of the present. 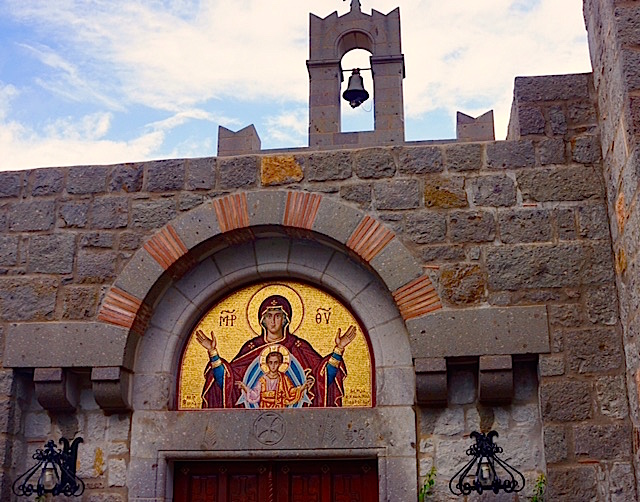 In Christian history, Patmos is an important island in the Dodecanese chain, as it was on this island, in a cave, where St. John the Divine received his visions that ultimately became the last book of the New Testament, The Book Of Revelations. I had been in that Cave before, so I wanted to explore the Evangelismos Monastery, dimension of Patmos’s spiritual history.  The Evangelismos Monatery is a place where approximately 40 nuns, dressed in black, keeps vows of diligence and prayerful silence, as they tend their garden, keep bees and pray.  The peace is palpable here, certainly  just as it was in the 15th century when it was founded. 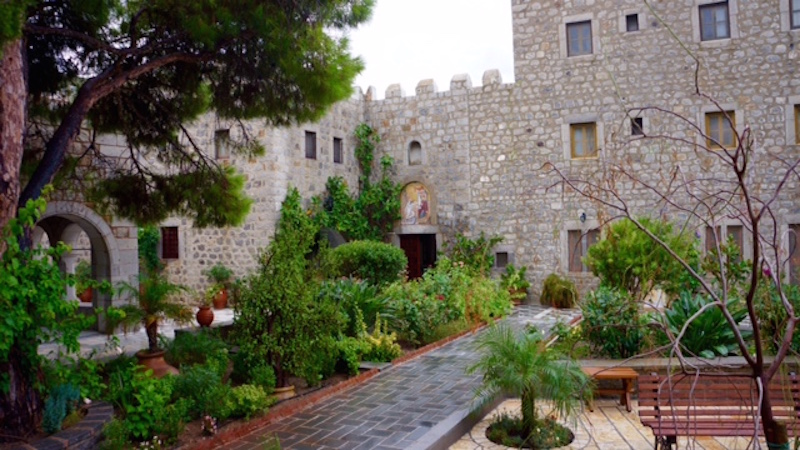 Exterior Courtyard of the Evangelismos Monastery

Inside the Chapel are many 15th and 16th century icons, where the nuns pray with bowed heads, genuflecting multiple times as they prayed.

Yet, combining the sense of an ancient, holy peace was also a sense of the present, in capitalist terms, of a gift shop. The Nuns made napkins, placemats and other home décor by doing a type of Byzantine stitch called “Spitha,” or sword. Though I was interested in this type of handwork, I was also interested in the multiple flavors of fruit liqueurs they made also: cherry, pomegranate, apple and beyond – holy spirits, indeed.  Upon leaving the Monastery, many of us felt we had contracted a sense of inner calm, something otherworldly, yet of this world, of separateness, yet of community. 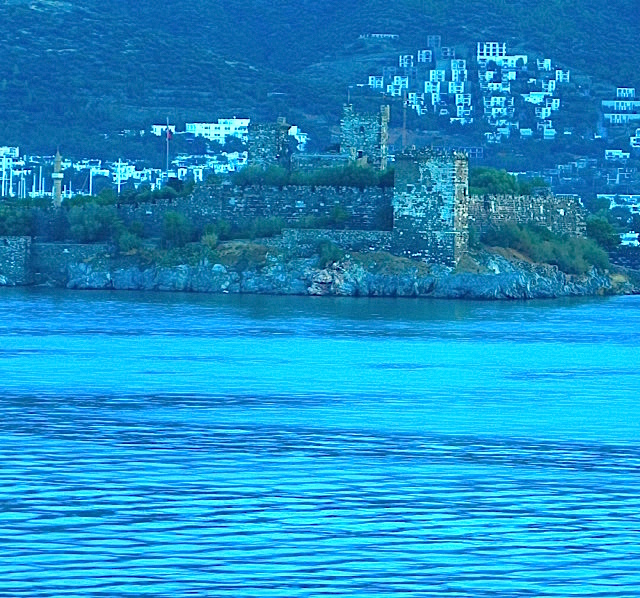 Castle Of St. Peter In Early Blue Hour Before Sunrise

This castle, basically a fortress, was constructed by the Knights Hospitallier of Rhodes in the 15th century, during the crusades of the Middle Ages. It was built partly from the remains of the mausoleum of Mausolus that had collapsed due to an earthquake.

The huge exterior walls were designed in the early 15th century. 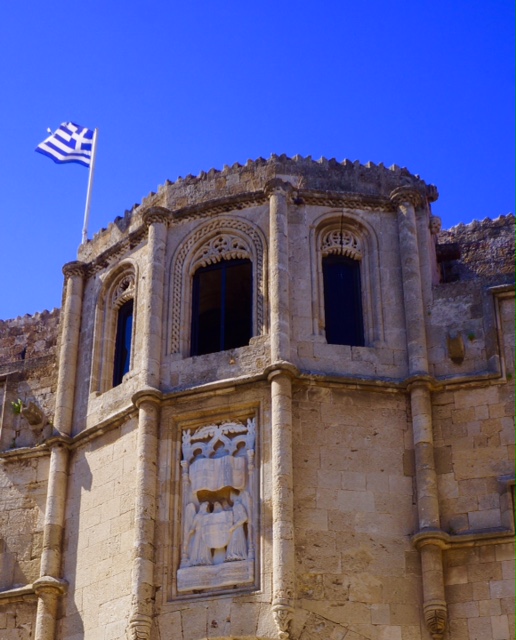 A Tower Of The Castle Of St. Peter

Climbing the uneven, and slippery steps to one of the courtyards was another experience of past into present. The steps had not been reconstructed, so it was easy to imagine how many knights and crusaders went up and down these stairs, to courtyards, then to towers. Then to war with the Turks.  The Courtyard was a fascinating place where ancient theatrical masks and statues existed along with active vegetation: green olive trees, Birds of Paradise, and pink Oleanders, vibrant life amid ancient statuary. 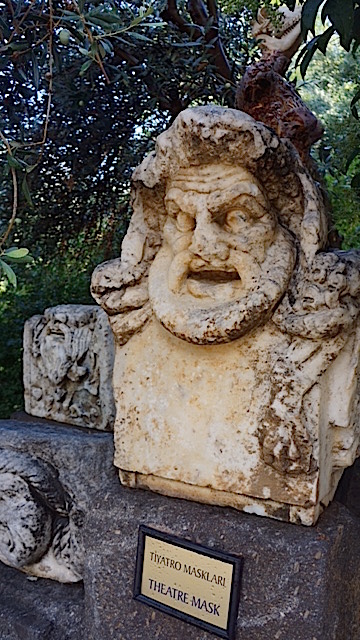 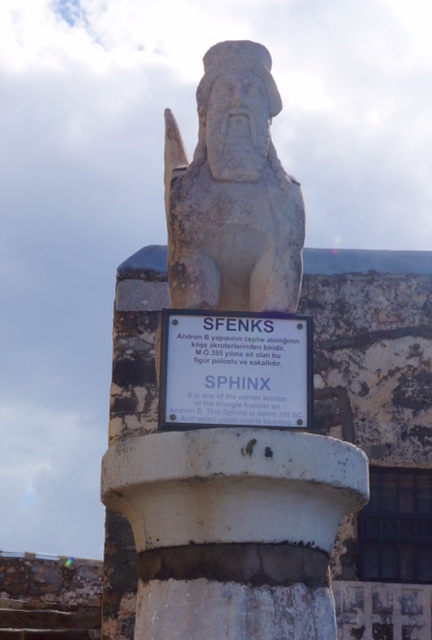 From the courtyard walkway, I saw a Muslim spire, rising in direct view of this Christian fortress/castle, and heard the wistful music of the Muslim call to prayer. 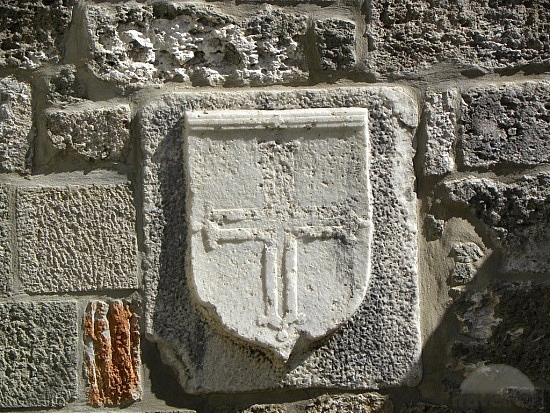 Rhodes: The Ruins Of Kamiros 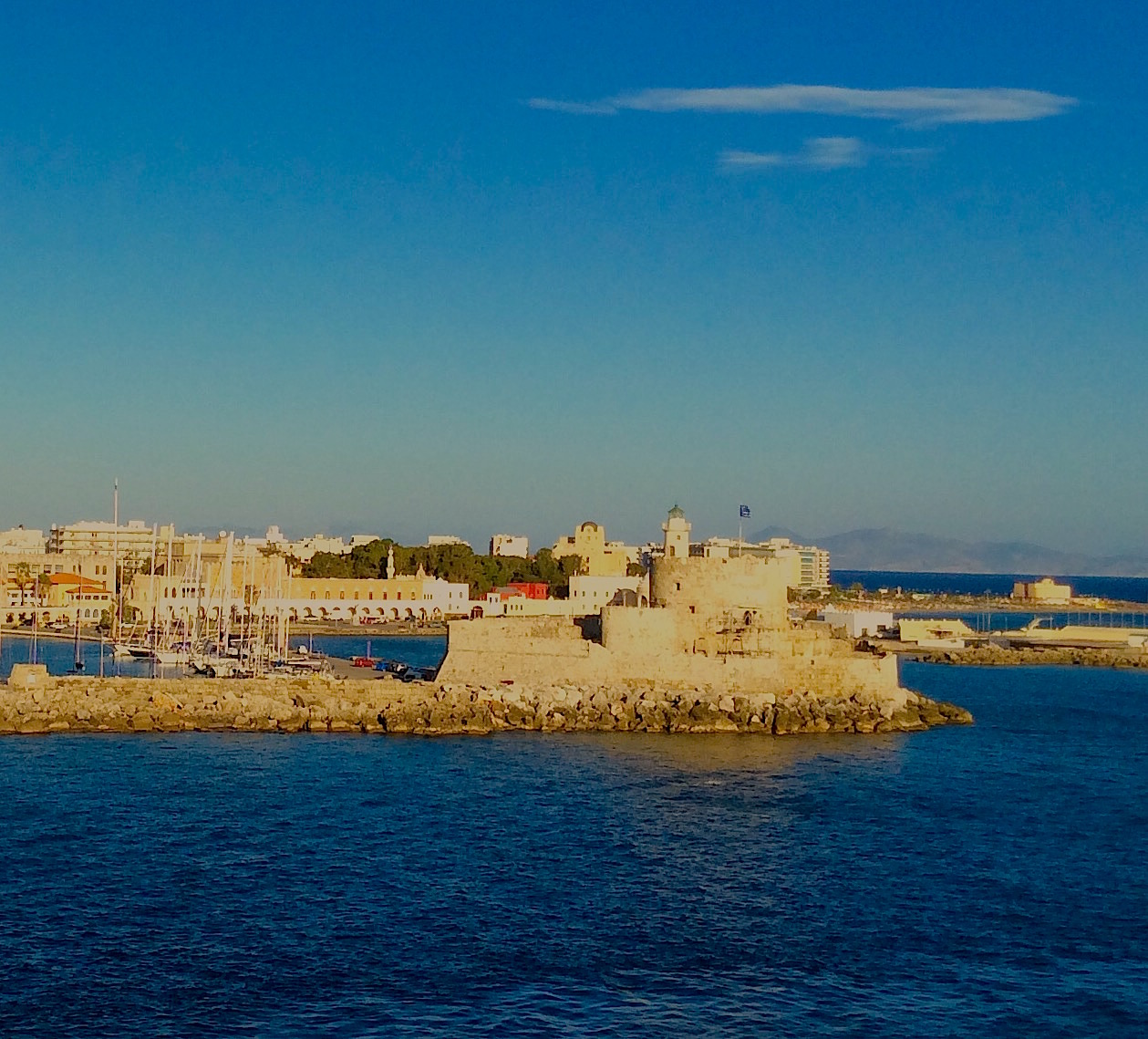 The Walled City Of Rhodes, From the Sea

I had been to Rhodes before, and many years ago, on a land excursion. What I never knew until I visited Rhodes and entered from the sea, was how much of an old/new city it was.

The island was inhabited as early as the late Neolithic period (4000 B.C.). In 408 B.C. there were the three major cities of the island – Ialyssos, Kamiros and Lindos. The two main ruins here is the Acropolis at Lindos, where I climbed up the 294 steps, 19 years ago. The views of the distant islands and Aegean were spectacular, but I wanted to go the second ruins – those lesser known at Kamiros. Not much is written about Kamiros because not much is known about it. It is still being excavated. 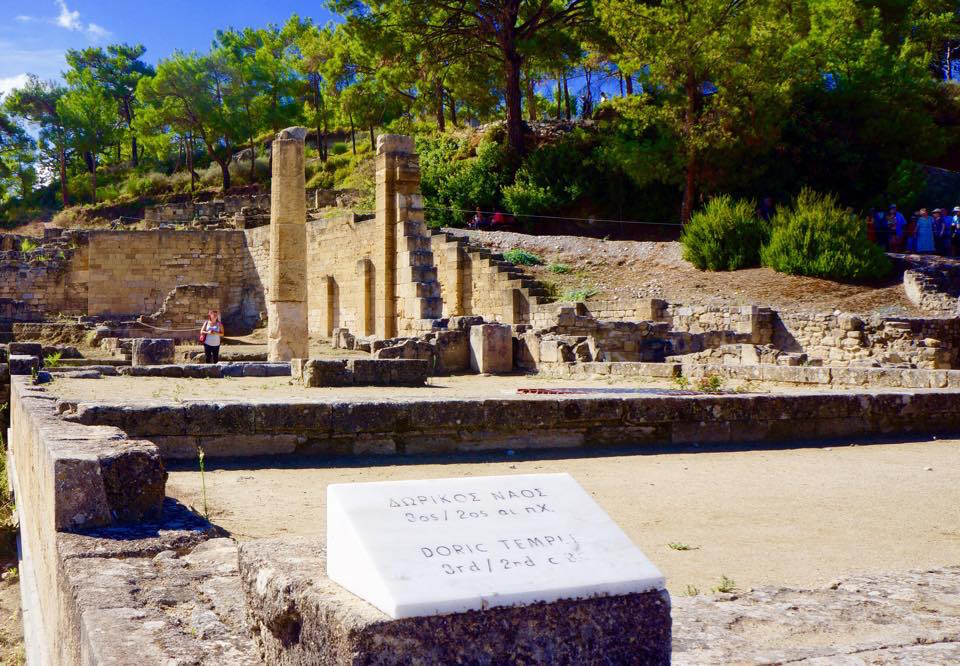 What’s Left Of The Doric Temples 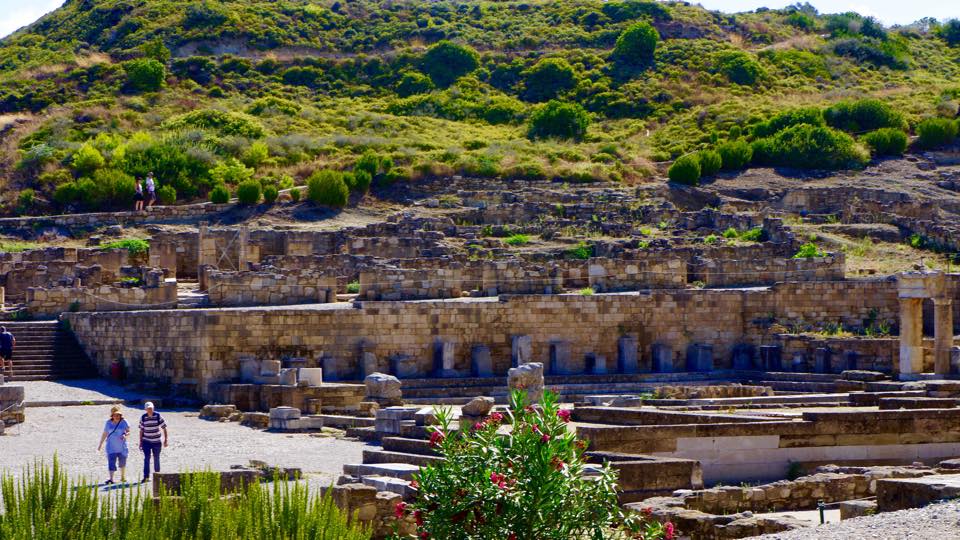 I walked through the ruins, touching the broken stones and altar fragments, surprised that so much had been uncovered and well aware there was so much more to do. Near the west side of the ruins facing the Aegean, were stone piles, and one was the marble head of somebody. 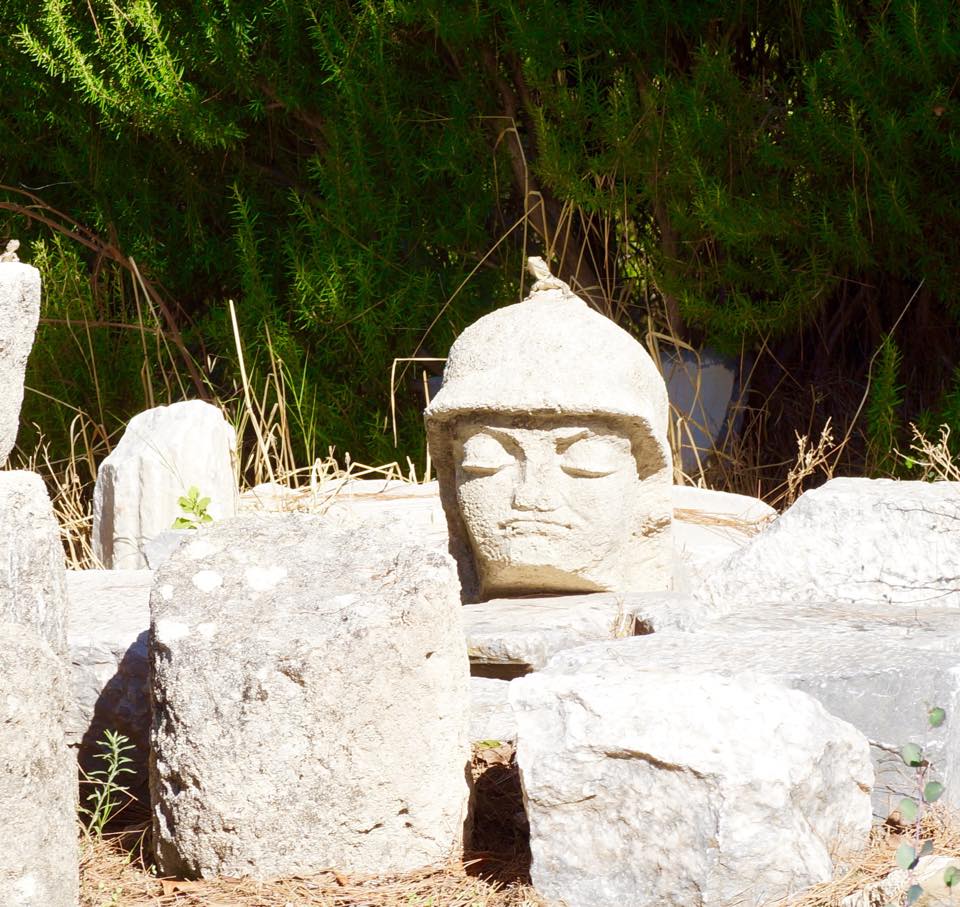 Lizard In The Sun On Head Of Ancient Statue Fragment

Atop the crumbling head of this probably ancient statue, sat a lizard sunning himself. I took the picture, noting, as always, that even in the most traumatic of forgotten ruins (and this was a major earthquake) life eventually asserts itself, again and again.

The Sunken City Of Kekova –

All that is known about Kekova is that it was once a thriving Turkish harbor town. In the second century AD, earthquakes so common to this area, shook the island so long that the town and harbor sunk into the sea. When I looked down from our touring boat, I could see the ghostly outlines of the harbor. It was a different color of turquoise. 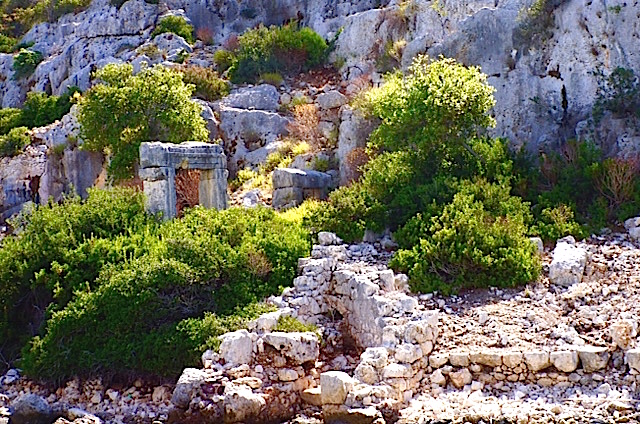 Kekova Island, And With A Still Standing Doorway.

And on the island, there were nuanced realities of what was there before. A doorway, and a wall with square niches carved, where the tour guide said, in the first and second centuries, candles were placed. The wall was either part of a home or part of a temple.

We left the boat and swam, literally, above the sunken ruins of the city, and I swam to the wall with the squares. Touching the wall, I felt like such an intruder, a person from the distant future who touched the remains of a distant past. I hoped time would forgive me. People say, it heals all wounds.

Our last stop was Santorini. I had been there before, and from my stateroom window, I saw that serpentine road I had walked 19 years ago, up to the white city. From the Aegean, Santorini looked like a white cap on the dark cliffs below. Though this time I had the option of taking the tram up the hill, the past was still with me. Twenty minutes later, I said no to the easy road, and was on that winding road again, Sisyphus-like, but without the rock, climbing, still climbing up. 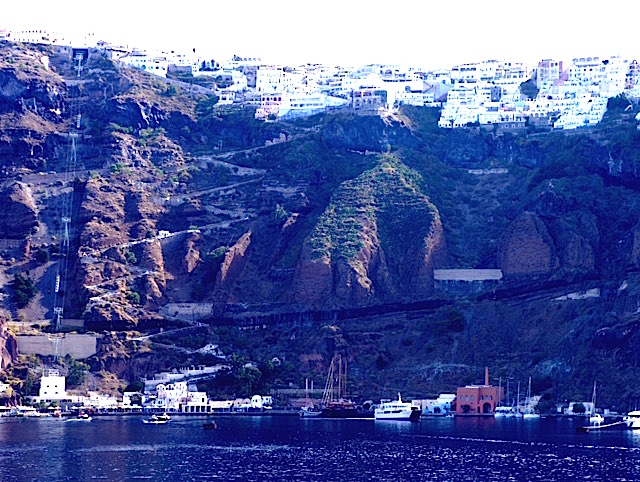 Santorini: Up The Hill