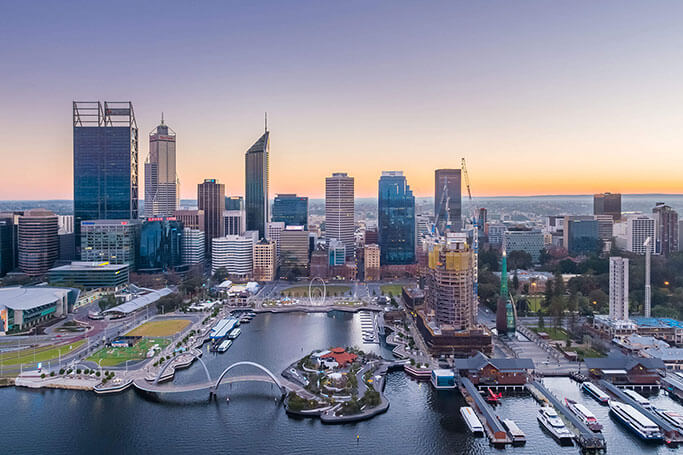 Eric RosadoOctober 9, 2019
For a country that prefers low-density living, we’re home to a significant number of majestic sky scrappers. From the tallest building in Perth right up to residential skyscrapers in Melbourne, check out this list to learn some of the majestic towers that stand tall in the Australian skies.

This residential building was once the tallest building in the world – from 2005 up until 2011 when Dubai’s ‘The Marina Torch’ took its place. The Q1 measures a whopping 322.5 meters with 78 floors, is home to the Sydney Opera house and features the only beachside observation deck on the two highest floors.

The Eureka Tower in Melbourne was also once the tallest residential building in the world when it was completed in 2006. The tower houses 556 apartment units across 84 floors. On the 88th floor is the Eureka Skydeck 88 which was opened in May 2007, which also features a 3-meter glass cube called “The Edge”, which suspends a group of people 300 meters off the ground.

This all-new residential tower is Brisbane’s newest and tallest building, standing tall at 270.5 meters high. It has 1138 apartment units including sub-penthouse and penthouse apartments. The 89th floor has a recreation deck which features Australia’s highest infinity-edge swimming pool.

This tower is the tallest commercial building in Australia, standing at 265 meters. Some of its major tenants are Bank of America, Standard & Poor’s, Rio Tinto, Blue Scoop Steel, ASIC, and Morgan Stanley.

Standing at a height of 260 meters, this commercial building also has some reputable organizations as their major tenants such as Morgan Stanley, Boston Consulting Group, Macquarie Group, and JP Morgan Chase.

This building in Brisbane is just short of 260 meters and is also known as the ‘Tower of Power’. Completed with a total project cost of $650 million, this tower also boasts a 5 Star NABERS Energy Rating.

Prima Pearl is yet another residential skyscraper with a height of 254 meters. This luxurious residential building housing 667 apartment units boasts some impressive facilities such as 17-seat cinema, a 25-meter pool, a day spa, a gym, and a virtual golf simulator. For the residents of level 46 and above, the building is equipped with an infinity pool, a bar and a lounge for their enjoyment.

Rialto Towers comprises of two separate towers – North and South. The South tower has 63 floors and is 251 meters tall while the North tower has 43 floors and stands at a height of 185 meters.
This tower is named after the historic Rialto Building just next to it and if measured by roof height, this tower is the tallest commercial building in Australia.

Before 1 William Street, the Infinity Tower was Brisbane’s tallest building. Standing at a height of 249 meters, it has 81 floors which house 54p apartment units.

The facilities that residents get to enjoy in the Infinity Tower include a lap pool, gym, sauna, and spa.

This commercial building shares the same height as Brisbane’s Infinity Tower of 249 meters, but with only 51 floors. Central Park is the tallest building in Perth and it features a fitness center conference center, mail facility and a 500-square-meter park with a fountain and plaza area.