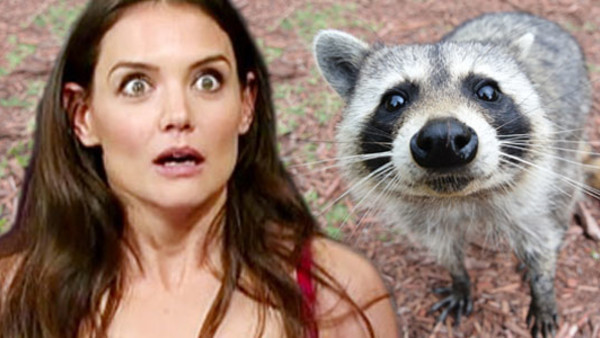 Barking at Raccoons: Katie Holmes Talks About Her Fear

Katie Holmes is known for her famous role on TV’s Dawson’s Creek, as well as escaping Tom Cruise and Scientology. After getting out of a situation like that you may be wondering what would scare such a brave woman. The answer to that; raccoons.

That’s right, Holmes has had a lifelong fear of the furry critters who have been typecasted as bandits and have a mask attached to their faces.

During an interview with Jay Leno in 2011, she opened up and explained she doesn’t think that animals are actually more afraid of us than we are of them.

“Everybody always says spiders or dogs or most things are more afraid of you than you are of them but I don’t find that!”

She went on to share a story about a harrowing close encounter that she had had with a raccoon.

“I was recently sitting outside and this raccoon comes right up. I’m expecting it to be more afraid of me but I’m staring at it and it’s staring right back like he will kick my butt! I didn’t know what to do so I stood up and barked at him and he ran away.”

When she shared this story the audience laughed and Leno said that Holmes was ‘crazy’, but she really made a good decision on the fly. When a raccoon is approaching you it is recommended that you make yourself appear larger.

That means you should stand up, wave your arms, and shout. While there isn’t any hard science that barking would be any better of a deterrent than just yelling if it works it works!

And really, this is an important lesson that we all should learn. There is a fairly high chance that if a raccoon approaches you without any type of fear that it is sick or injured. You should never allow a raccoon to get close just in case it is, no matter how cute that trash panda looks.

If you are like Holme’s and want to keep raccoons away there are a few steps you can take:

If you follow these simple steps you likely won’t find yourself having to bark at a raccoon any time soon.