THE MOST EXPENSIVE BILLIONAIRE HOMES IN THE WORLD.

Jana Partners founder Barry Rosenstein recently purchased an East Hampton estate for $147 million, setting a new record for the most expensive home ever purchased in the United States. But compared to other homes owned by FORBES billionaires around the world, that price tag was a relative bargain. Barry Rosenstein is so wealthy he just bought America’s most expensive home.

Case in point: Reuters broke the news that a penthouse at prestigious One Hyde Park in London’s Tony Knightsbridge neighborhood had sold for $237 million, setting a new world record for the priciest apartment sale ever. Although the buyer remains unknown, the purchaser is an Eastern European, reports Reuters. Given the cash involved, the new owner is also very likely a FORBES billionaire. (In 2011, Ukraine’s richest man, billionaire Rinat Ahkmetov, paid $221 million for a penthouse in the same development. At the time, that was the most expensive apartment sale ever.) Throughout the global economic crisis and recovery, the super-wealthy have been putting their money into the comparative safe haven of real estate. “After years on the outskirts of asset allocation, property is starting to move into the prime investment arena traditionally occupied by stocks and bonds,” says the Candy GPS (Global Prime Sector) Report, produced by Deutsche Asset & Wealth Management with research from Savills. As demand for real estate pushes property values up the world over, the price tags of homes already owned by the super rich also increase. Last year when we combed through property records to identify some of the most expensive homes owned by members of the FORBES Billionaires List, many estates fell well below the $100 million mark. This year, when we repeated the same exercise, only six of the top 20 most expensive homes owned by billionaires were priced less than $100 million–and several are valued at more than twice that figure.

The title of the most outrageously expensive property in the world still belongs to Mukesh Ambani’s Antilia in Mumbai, India. The 27-story, 400,000-square-foot skyscraper home–which is named after a mythical island in the Atlantic–includes six stories of underground parking, three helicopter pads, and reportedly requires a staff of 600 to keep it running. Construction costs for Antilia have been reported at a range of $1 billion to $2 billion. To put that into perspective, 7 World Trade Center, the 52-story tower that stands just north of Ground Zero in Manhattan with 1.7 million square feet of office space, cost a reported $2 billion to build.

In second place is Lily Safra’s Villa Leopolda, in Villefranche-sur-mer, France. The estate is reportedly one of several waterside homes that King Leopold II of Belgium built for his many mistresses. Set on 20 acres, the massive home was valued at 500 million euros ($750 million at the time), when Russian billionaire Mikhail Prokhorov tried to buy it in 2008. Prokhorov eventually backed out of deal, losing his 50 million euro deposit.

The third-most expensive billionaire home–and the most expensive in the United States–has to be Fair Field, Ira Rennert’s Sagaponack, N.Y., enclave. Although Rennert built the property and it has never traded hands, the local assessor’s office peg its value at about $248.5 million in its latest (2014) tentative tax assessment. Since no Hamptons estate has ever sold for so much (Rosenstein’s recent $147 million buy set both the Hamptons and U.S. record), it’s hard to know if the home would really ever fetch such a sum. In the meantime, the property taxes on Rennert’s 29-bedroom, 39-bath estate have got to be monstrous. (Larry Ellison’s 23-acre Japanese-style estate in Woodside, Calif. enjoys the opposite situation: the home reportedly cost $200 million to build, but was assessed at just over $73.2 million in 2013. Nice property tax break.)

As 2014 continues, the list of outrageously-priced homes owned by billionaires is stacking up. Although the market cooled off a bit in in 2013, with no properties trading hands above the $100 million mark (2011 and 2012 both saw $100 million transactions), 2014 has kicked off with a bang. London set a new record, and three homes have sold for more than $100 million so far this year in the U.S. alone.

Just weeks before Rosenstein (who is not on the FORBES Billionaires List) snapped up the East Hampton estate formerly belonging to investment manager Christopher Browne in a private deal, an unknown buyer purchased Connecticut’s Copper Beech Farm for $120 million from timber tycoon John Rudey–at the time the most expensive home sale ever in the United States. Set on 50 acres of Greenwich waterfront, the estate includes a 13,519-square-foot main house with 12 bedrooms, seven full baths and two half baths and a wood-paneled library. Also included: a solarium, a wine cellar, and a three-story-high, wood-paneled foyer. David Ogilvy, the agent who brokered the sale, tells FORBES the buyer plans to keep the home intact rather than tear it down (a common tactic among the rich). We’d bet money that individual is a billionaire.

At the end of March, the Los Angeles Times broke the news that Suzanne Saperstein had sold her expansive Holmby Hills estate, Fleur de Lys, for $102 million. That property, too, went to an unknown buyer. Although the property tax bill will be mailed to a law firm that shares an address with the Milken Institute, a Milken spokesperson told FORBES that neither Michael Milken nor his Institute are the buyer. 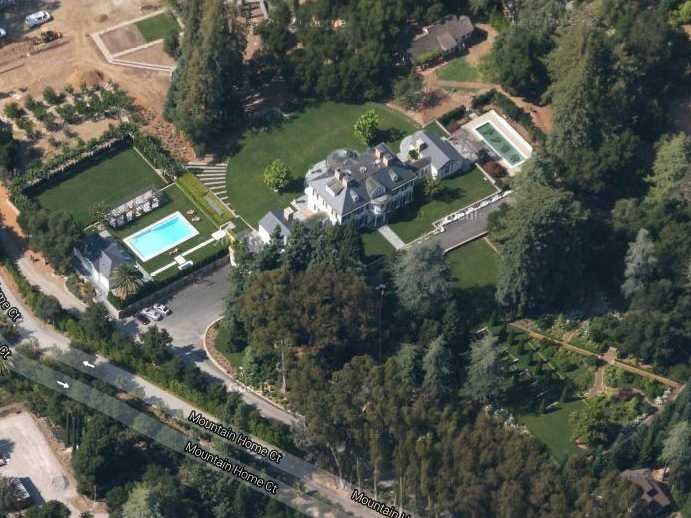 The latest sales continue the ongoing trend of billionaires and $100-million-plus property buys. In November 2012, Softbank billionaire Masayoshi Son, of Japan, snapped up a Woodside, Calif., estate for $117.5 million. Russian venture capitalist Yuri Milner purchasing $100 million on a property in Los Altos Hills (paying 100% more than its market value, according to tax assessors) in 2011. In 2007, billionaire fund manager Ron Baron paid $103 million for 52 undeveloped waterfront acres in New York’s East Hampton–and that was before construction costs. With properties like Dallas’ $135 million Crespi-Hicks Estate and the $90 million Carolwood Estate still on the market, more news is sure to come down the road.