3 HOTELS WITH THE DESIGN OF NATURE: AMANGIRI, DELANO AND THE PARK LAS VEGAS.

Amangiri — View From A Mesa.

To many, there is a stereotype, even an archetype, of the desert. It is thought of, with some grains of truth, as a dry, lifeless environment, where nothing grows except Jimson weed and Tarantulas. But, one of the things you also learn as time passes, is that there are exceptions to this stereotype, actually any stereotype. Those who live in a desert environment understand that Saguaro Cactus flowers bloom, and Prickly Pear really do produce sweet tasting, very purple fruit.

Still, a colleague once commented that it is not an accident that most of the great Abrahamic religions grew in the desert. Wind and water that make the deserts bloom, also have an ethereal quality, something beyond the present, in their existence. Wind often precedes rain, and rain, after a drought, a cool, windy day after weeks of over 100, are blessed things, rights after wrongs, renewals of hope.

There are also designs in and of nature that have, in recent years, been brought into new social, mainly hospitality, contexts. Most renowned is Amangiri, the second Aman Resort in the United States.

It is a popular resort, and unlike any other as it is in the southern desert of Utah, near the red rocks of Zion, near the deep blue of Lake Powell. It lies around and sometimes in, some of the great natural rock curvatures of the earth, near the Escalante Staircase and the Vermilion Dunes. Its architecture compliments the rock outcroppings, allowing ancient desert solitude into contemporary hospitality, allowing guests to breathe it in, perhaps for the first time.

But this idea of bringing desert substance into hotels is not only specific to the peaceful Amangiri.

Recently Las Vegas, not what anyone would call a place of deep solitude, is doing it also. Two years ago in 2014, Delano opened an all suites hotel at the Mandalay Bay Resort complex, a mile away from City Center. On the outside walk-in lobby, usually a place for flower arrangements and fountains, guests walk between a 126,000-pound boulder, cut in half.

It’s a unique urban decompression as well as a powerful transition from the activity of the Strip to a more serene environment – no gaming or smoking at Delano. These 150 million year old rocks are significant designs of nature with variegated, striated palettes of yellow, orange, deep red, and gray. They are examples of touchable history, composed of Meta-Quartzite: one weighs 77,000 pounds, and the other 49,000.

Carrying this design of nature into the hotel is an original rock art installation, resembling a rock curtain, by South Korean artist Jaehyo Lee, known for creating great designs from natural elements.

But even more recently, still in Las Vegas, as of April 2016, The Park, has been constructed and launched. MGM Resorts partnered with landscape architects and urban designers, both nationally and internationally, all focused on the goal of creating a space where the Mojave desert landscape – huge Meta- Quartzite boulders, double eight foot water walls; Yucca, Agave and other desert plants, plus over 200 Palo Verde, Acacia and Mesquite trees — will quiet the tumult of the Strip, by the sound of water, and the rustling of trees. 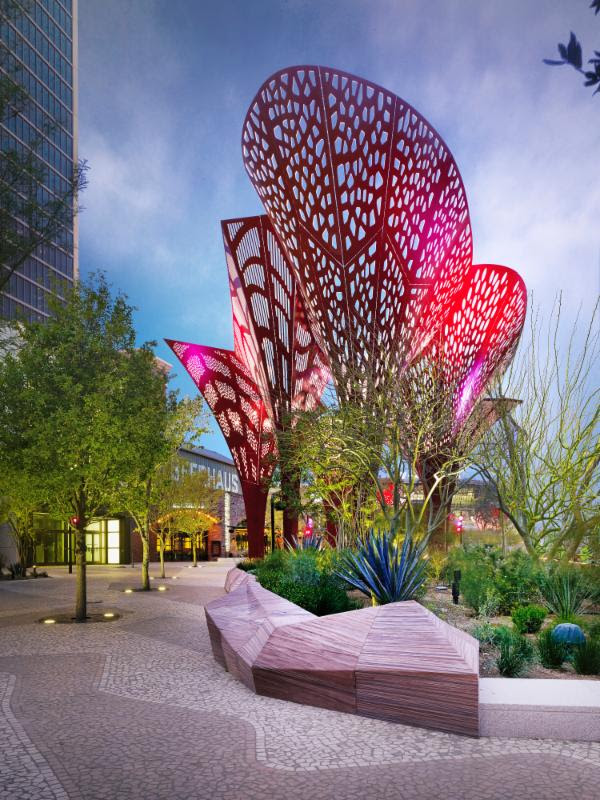 But there is one more thing in The Park — not natural, but the designs, again have been borrowed from nature. They are the Shade Structures.

The Shade Structures are huge structures that allow filtered shade in the daytime. At night, due to the carefully designed perforations, nearly 1,200 per crown, they will emit an intense glow, creating a light effect. On the quarter hour, the structures will look as if they transform into large cactus blooms with petals that have different colors. This computer sequencing technique will allow for a “visual chime” to take place. Visitors will be able to tell what time it is based on the changes, just like the aural chimes on a clock.

All these designs remind us, whether in Las Vegas or at Amangiri, the desert purifies and quiets the rattle of our urban spirits. Touching the ancient boulders, listening to the swaying Palo Verde and the flowing water, we know our primordial selves are still alive, and quite well.