The original article can be found at Fast Company.

Billionaire executives have the luxury of vacationing anywhere in the world. And yet in recent years, Burning Man, the weeklong party held in the Black Rock Desert–it’s part electronic craft fair, part pagan cult, part rave–has attracted the world’s premier tech leaders. Facebookers (rumored to include Mark Zuckerberg himself) and the entire executive team at Google have joined the dreadlocked of hair, the tattooed of face, and the pierced of nipple. Cofounder Larry Page was reportedly spotted one year in a skintight, shiny silver onesie.

“THE CAMP ITSELF EMPLOYS A PROFESSIONAL KITCHEN STAFF OF 25 (INCLUDING A SUSHI CHEF WHOM FERRAZZI SAYS WORKED FOR WOLFGANG PUCK) IN A CUSTOM KITCHEN AIRSTREAM DESIGNED ESPECIALLY FOR THE EXPERIENCE.”

There’s the urge for suits to hang with the cool kids, of course. And in recent years, the cultural oddity of Silicon Valley bohemians has flourished. But for the most part, the business elite aren’t strapping on thongs and diving into the throngs. They’re watching the Burn from a bubble, and possibly discovering their next big ideas in the process. 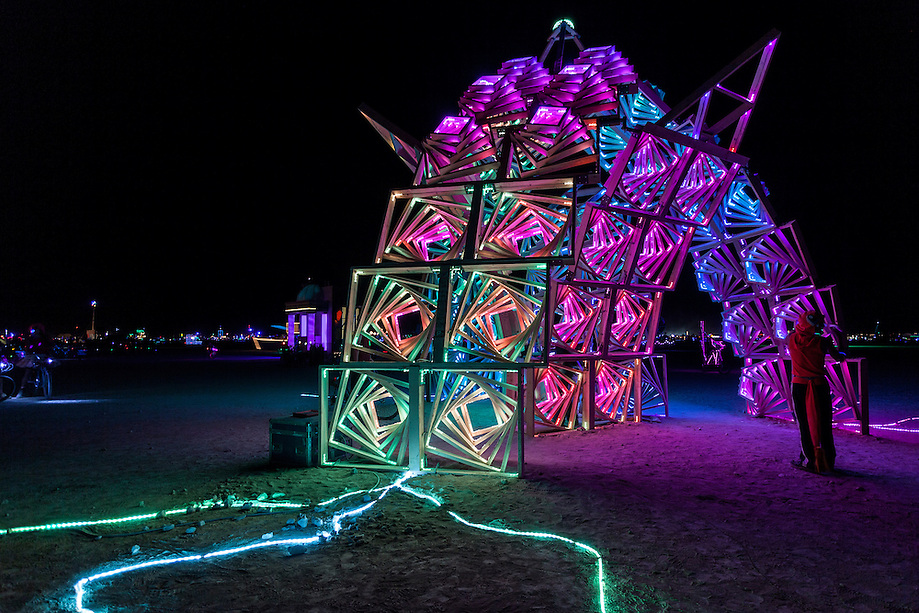 “If you are into creation and design, Burning Man is not a bad place to go for inspiration,” says Keith Ferrazzi, author a Never Eat Alone, founder and CEO of Ferrazzi Greenlight, a research and consulting firm based in Los Angeles; and the creator of a Burning Man camp for C-suiters. His guests spend about $10,000 for a week’s stay in relatively secluded areas and fly directly in and out of Black Rock City airport, where they’re greeted by Ferrazzi’s staff. The camp itself (which Ferrazzi says turns no profit) employs a professional kitchen staff of 25 (including a sushi chef whom Ferrazzi says worked for Wolfgang Puck) in a custom kitchen Airstream designed especially for the experience. Plus, there are two water trucks, a full generator system, and, of course, fine dinner settings for chowing down on gourmet meals. But in keeping with the gathering’s communal spirit, no one is ever turned away from the camp itself. Any participant, could, in theory, leech off the camp for the entire week (only a few have abused the generosity over the years).

Guests of Ferrazzi might enjoy structured activities (Ferrazzi employs a person year-round to plan his camp). But, aside from safety and structural concerns, Burning Man itself is a loose situation. When it comes to the art and experiences there, it’s a living exercise in crowdsourcing—the principle behind some of Silicon Valley’s most valued products. In an interview with a participant who piloted an early version of Google Maps at Burning Man, Google Engineer Michael Favor explained [PDF], “The power of Google is that they don’t do all the work. People posting content do. The same is true here at Burning Man. Citizens create the vast majority of things.” In an example of the “Gift Economy” at Black Rock, someone might just give away her body-painting or lecturing skills only to later find a free doobie passed her way. And is that so different from the experience on Facebook, with whom you freely share scads of valuable personal data, only to be pleasantly surprised later by a picture of your distant cousin’s new twins?

In exchange for learning more from Ferrazzi about why CEOs are attending Burning Man, we agreed not to reveal his guests’ names. Here’s what he shared.

“Nobody goes expecting a spiritual experience,” admits Ferrazzi, who says that the executives’ initial motivation is just to satisfy their curiosity itch or earn the badge of coolness that comes with attendance.

AMONG THE MANY PLANNED ACTIVITIES AT FERRAZZI’S CAMP, PARTICIPANTS ARE ASKED TO SPEND TIME WITH THE MOST OUTRAGEOUS PERSON THEY CAN FIND.

Indeed, Google Cofounders Larry Page and Sergey Brin hired now-Chairman Eric Schmidt based in part on their common love for the Burn.

“Larry and I searched for over a year, and managed to alienate 50 of the top executives in Silicon Valley. Eric was experienced and the only one who went to Burning Man. Which we thought was an important criterion. He’s a great cultural fit. We hang out together. We discuss and decide on stuff together. More companies should look at cultural fit,” said Brin, in an interview supposedly transcribedby former Harvard Berkman Fellow, Doc Searls in 2002.

Attendance is proof that an executive would spend his or her valuable time in the inescapable creative anarchy of the quirky art festival. “Attending there is different between paying lip service to saying you want creative people in the company and actually showing that you genuinely appreciate creative people,” says Ferazzi camp alum, James Schroer, the former head of marketing at Chrysler and Ford.

Burning Man, first and foremost, is a festival for the proverbial right-brained. Cut off from the grid in the desert, there isn’t much of a schedule to abide by. Meetings are far less formal. And a “hard stop” means something completely different here than it does on a conference call.

Hordes of elaborately costumed Burners roam the grounds of themed camps in trucks-turned-art cars. At night, art cars are transformed into makeshift multistory techno dance clubs-slash-conga lines. Burners are advised to wear blinking lights so as to avoid getting hit, as the cars wind haphazardly over the grounds, often with drug-fueled partiers gyrating behind them.

In other words, Burning Man is a happy anarchy. The kind Silicon Valley likes to celebrate. Google Doodle was conceived at Burning Man.

Among the many planned activities at Ferrazzi’s Camp, participants are asked to spend time with the most outrageous person they can find—call it a weirdo internship. The goal is to help them break their own stereotypes and find value in a person they ordinarily would have dismissed as crazy.

Ferazzi says his attendees develop a newfound appreciation for the creatives on their teams. He recalls one executive who came back from Burning Man and liberated his designers from the business development team. “He got more return on innovation from that group when he trusted and respected that group to unleash its creativity,” Ferrazzi says.