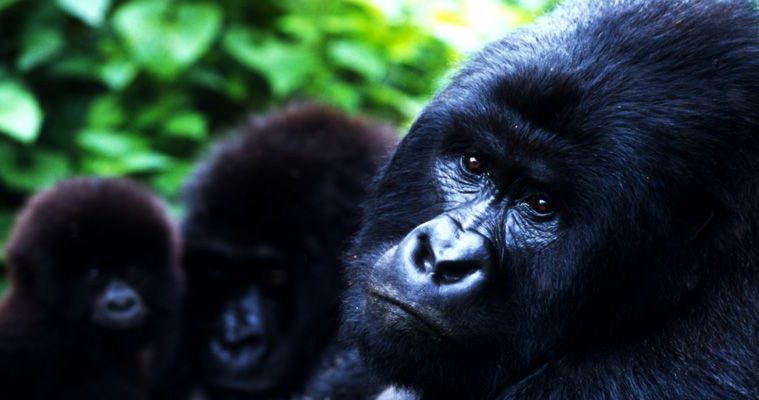 In the extreme southwestern part of Uganda, straddles a magical destination which is home to the rare and endangered mountain gorillas; the less known Mgahinga Gorilla National Park. This is not only the smallest protected area but a scenic destination that is characterized by three conical volcanoes. These most eye-catching tourist attractions can be seen from a distance and will be your guide to the wonderful home of the mountain gorillas.

Mgahinga National Park covers an area of about 34 square kilometers and lies at the border of Uganda with Rwanda and the Democratic Republic of Congo (DRC). It is part of the greater Virunga Mountains that stretch over the three countries. It lies on the northern slopes of the three extreme northern great Virunga Mountain ranges of Mount Muhabura, Gahinga and Sabyinyo.

Less known by tourists, the park was gazetted in 1991 to offer refuge to the mountain gorillas that roam freely through the Virunga ranges. The park protects several rare creatures that call it their home including the mountain gorillas and the unique golden monkeys, 115 bird species, buffaloes, bush bucks, elephants to mention but a few.

Depending on what your travel interests are, Mgahinga national park can be visited at any time of the year. The park experiences two wet and dry seasons. The park receives its highest amount of rainfall during wet season and the lowest rains during the dry season. Due to abundant rainfall amount, much of the afro-montane vegetation is supported including the bamboo which mountain gorillas depend on.

The wet season starts from March to May and the second phase of it is experienced from October to September.

The dry season stretches from June to September and from December to February.  Please note that many travelers go for safaris during this season and therefore you need to book your trip at least 5 months to that exact travel dates.

How to reach to Mgahinga National Park

The park can be reached both by road and air. By road, it can drive via Kampala through Kabale and then to Kisoro Town using a 4wheel drive safari car. You will spend about 8-10 hours’ drive from Kampala to get to the park. If you do not have a private means of transportation, there are buses that take you up Kisoro Town and then you can easily connect to the park using a rented car. Ntebeko gate, the only gateway to the park is about 14 kilometers drive from Kisoro via a dirt road. Alternatively, you can as well take a flight from Entebbe airport or Kajjansi airfield and then land in at Kisoro airstrip.

Things to do in Mgahinga National Park

This is the major adventure activity that tourists seek from the Mgahinga National Park.  Most tourists visit the park to engage in gorilla safaris into the bamboo forests in search of the endangered mountain gorillas. Gorilla trekking is done every morning and treks start from the park information center at Ntebeko.  The park is a home to about 80 mountain gorillas that roam the Virunga Mountains.  Mgahinga is the second destination in Uganda where you can only track these rare creatures.

There is one habituated gorilla family that can be visited by tourists. The Nyakagezi is the only gorilla family that is habituated for tourist visits. This family has been known for roaming through the nearby Rwanda and Congo. However for the past 5 years, it has been a resident in the park without doing its nomadic movements. Therefore, it is readily for gorilla tracking and permits for a visit can be booked at the Uganda Wildlife Authority offices in Kampala.

Besides tracking mountain gorillas, the park is home to the golden monkeys that live in the high slopes of the volcanoes. These primate species are endemic to the Albertine rift and come in bright orange gold body, cheeks and tail contrasting with the black limbs, crown and tail end. These endangered primates are resident in a few areas in Africa and can only be seen in either the Mgahinga of Uganda or the Volcanoes National Park of Rwanda. You can book for golden monkey watch permits where you will have a chance to see the most eye-catching old species of monkeys.

For adventure lovers, Mgahinga National Park offers short hikes to three of the eight Virunga Volcanoes. During the trip, you can embark on a hiking experience at pocket-friendly prices. There are three popular trails within the park, a 2 Day Mount Sabyinyo Hike, Mount Gahinga Hike and Muhabura Hike. Hiking through these volcanoes requires you to be physically well and make sure that you have packed appropriately starting with better hiking boots that are waterproof, bottled water and energy giving snacks, rain jacket and others.

Bird watching is one of the most incredible safari activities for you can be part of while on safari in Mgahinga National Park. The notable bird species for you to catch a glimpse at while Uganda safari in Mgahinga National Park include the olive woodpeckers, whydah, ibis, yellow vented bulbul, stonechat, waxbill, fire finch, speckled moose bird, grey capped warbler, the western green tinker bird, Africa hill babbler, archer’s ground robin and many more.

Other safari activities for you to enjoy here include

There are several accommodation options for your overnight stay at Mgahinga National Park. These range from budget hotels to luxurious safari lodges.

Conclusively, Mgahinga National Park is one of the best safari destinations in Uganda that reward visitors with rare experiences right from primate adventures like mountain gorilla trekking, golden monkey tracking as well as birding and volcano hiking.