Welcome to a series of articles rounding-up the very best restaurants in London for specific cuisines. We’re not necessarily talking authenticity here, rather the kind of food we really love to eat. Value is kept firmly in mind, and most of our picks represent this. On the flip side, of course, some places are so good that they are worth saving up for. As ever, please do let us know your thoughts and other recommendations in the comments below.

Influenced by northern Spain and the Mediterranean, but also in part by South America,Angels & Gypsies at the Church Street Hotel in Camberwell is an interesting place. In church-like surrounds, legs of ham are carved and served alongside tapas dishes including chorizo in cider, salt cod fritters, meatballs, croquetas, empanadas and more. Carefully executed cooking and clever flavour combinations keep things just about adhesive. Though certainly one of the pricier restaurants in the area, on a broader scale this is good food at a very good price.

The mission statement of this Crouch End tapas bar declares the owners’ intent to blend the ‘warmth and energy of Barcelona with edgy Brooklyn cool’. With bare brick walls and a large steel bar making a solid impression, we’d say that they’ve nailed it. In terms of food, there’s little to take you by surprise except the quality. The tactic seems to be to do the classics bloody well rather than play around with them too much, and it pays off in lusciously sharp, house-marinated boquerones and decadently rich meatballs alongside an array of simple but stunning dishes that (perhaps aided by the off-centre location) come in at well under their worth. Those who live locally are lucky, others should be willing to travel. 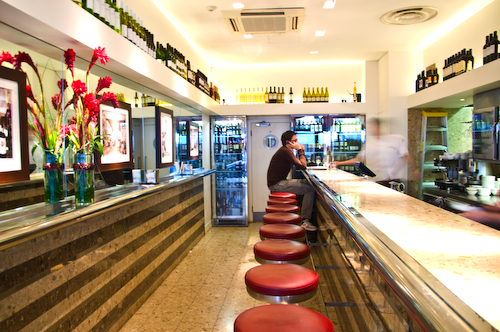 When Fino opened up in Fitzrovia in 2003, it was among the very first of London’s new-wave Spanish eateries, places where tapas wasn’t a gimmick anymore and didn’t come with flags on the walls or framed photographs of bull fighters. While Fino has remained a great restaurant, we reckon younger sister site Barrafina in Soho has outdone it. Here you’ll find the same breed of simple but superlative dishes, flavour-packed ingredients direct from Spain, and wonderful hams and meats. But there’s a more bustling, informal atmosphere to soak up, and you’ll get a bit more bang for your buck too. The bar-style seating makes room for just 20 or so bums, so you should expect to wait in line before you can plonk yours down, but given you’re kept fed and watered as you wait, it all becomes part of the spirit of things.

Having already been the main importers of Spanish food into London for years, Brindisa’s first tapas bar opened near Borough Market in 2004. There are now restaurants in Soho, South Kensington and Shoreditch, and a food shop and bar in Brixton, while the original is still going strong. No longer is it the only place to go for top quality, carefully-sourced Spanish produce, but if you’re in the vicinity of one of the restaurants then it’s still a very good bet indeed. Or, of course, you can also grab one of Brindisa’s legendary grilled chorizo baps from Borough Market of a lunchtime.

It made a success story out of a less than ideal location midway between Brixton and Clapham on Acre Lane, now Boqueria has opened another branch in Battersea. It specialises in tapas dishes that are as well-cooked as they are well-priced; in fact, we not so long ago included the original restaurant in a list of places where you could eat well for less than £20 a head, though you could easily splash out and spend a bit more. Spanish wines, cheeses and cured meats are in abundance, while dishes such as beef tenderloin cooked in pedro ximenez sherry show the kitchen’s creative side. 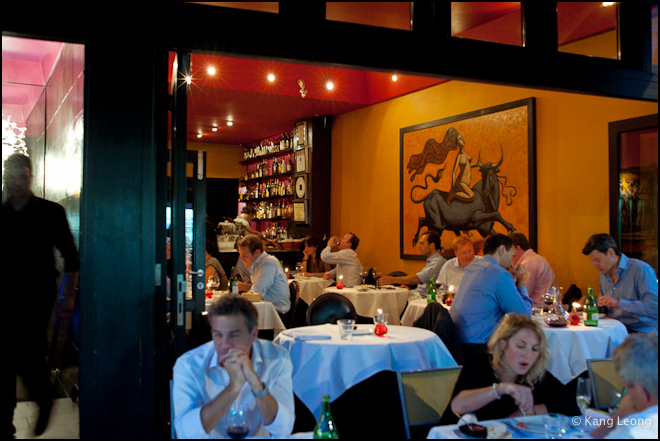 One of five Spanish restaurants owned by Abel Lusa in the Brompton Road vicinity, Cambio de Tercio is the fine dining flagship of the bunch. Both surroundings and dishes are bright and modern, with the latter drawing influence from legendary molecular gastronomy hotspot and long-time best restaurant in the world, elBulli. Highlights include clever takes on tapas classics such as patatas bravas or tortilla, as well as all-new creations like smoked eel with almond ice cream. Given the quality, a nine-course tasting menu is fairly reasonable at £45, and the restaurant boasts London’s most extensive Spanish wine list, too.

Another of the Cambio de Tercio group, Capote y Toros deserves its own spot on this list for its loving dedication to two of Spain’s most loved products: ham and sherry. The hams come from the much-revered Cinco Jotas producer and are imported directly from Spain for £500 a pop, while more than 125 different sherries are on the wine list. This is said to be more than on any list outside of Jerez. A much shorter tapas menu to that of Cambio de Tercio a few doors down uses ham as an ingredient in many of the dishes. Soho sister restaurant to Fitzrovia’s Barrica, Copita is full of rustic Spanish charm in the form of a chequered floor, tiled walls, overhead fans and tightly-packed bar stools. The food is equally classic, but with an attention to detail that goes a step beyond many a tapas joint: smoked ham, spring greens and smoked paprika, or cod carpaccio with dill, capers and orange for example. Almost all of the bar’s extensive wine selection is available by the glass, including up to 13 sherries. This itsy bitsy tapas bar is just one of José Pizarro’s Bermondsey Street spots, the other being his larger, more formal restaurant Pizarro down the road. We’re big fans of both of them, but it’s easily José that takes the crown for us — and it’s one of our very favourites. It’s always packed, it’s hard to get a seat, and if you do get one you’re likely to be in a cramped row at the bar. But that’s all part of the fun. A proper outlet of Spain in south London, here it’s all about snacking on a few small dishes while you sip sherry and chat, usually standing up. Think of it less as a restaurant, and more of a pub. From olives or almonds to calamari, meatballs or grilled fish, dishes are purposefully basic, but of a very high standard indeed. Moro has been a mainstay of bustling Exmouth Market for almost 20 years, and is showing no signs of waning. The tapas menu here draws influence from across North Africa as well as the Iberia region, so Spanish tastes and influences are mixed with those from Morocco, Portugal and elsewhere. The result is vibrant, lightly-spiced and fragrant salad dishes that sit comfortably alongside charcoal-grilled meats and Spanish hams and cheeses. Spain gets the lion’s share of the wine list, including a big showing for sherry, while the noisy, sometimes raucous but always fun atmosphere is almost as big a draw as the food and drink. Also try slightly more casual Morito next door.

Set on Goodge Street, Salt Yard is the original restaurant from the group that now also ownsOpera Tavern in Covent Garden and Dehesa and Ember Yard in Soho. As with the others, it splits its focus pretty equally between Spain and Italy, excelling in plates of hams, cheeses and sparky, bright-flavoured small plates to share. The wine list is built entirely from the two focus countries and features an impressive array of sherries. While food and drink is an equal winner all round, the atmosphere is a tad less bustling here than at its two Soho outlets, so choose your venue according to the occasion. Read our recent review of Ember Yard here.

Set on the Ropewalk stretch of Maltby Street Market, Bar Tozino is a convivial ham-filled hangout that couldn’t feel more European if it tried. In a bare-brick, low-lit railway arch that’s almost always packed to the non-existent rafters, legs of ham hang from the ceiling, their tasty, savoury aroma aptly setting the scene of something like a smoky jazz bar for Hispanophiles. A blackboard lays out the varieties of ham available, along with a few other small plates, while vermouth, wines and sherries are the bulk of the drinks list. Beware, though, when you enter Tozino you will lose hours of your time. Maybe it’s a good job that it’s only open from Wednesday to Sunday.

Camino: Dependable tapas and lots of Spanish wine, with branches in King’s Cross, Blackfriars and Monument.

Drakes Tabanco: The newest addition to the Barrica and Copita group, you can enjoy sherries straight from the cask at this Fitzrovia call-in. Read our full review here.

Donostia: Fresh flavoured bites in airy surrounds at this Marylebone venture from an ex-Barrafina chef.

Ibérica: A big player on the Spanish food scene, tuck into creative tapas from Michelin-starred executive chef Nacho Manzano at branches in Marylebone, Canary Wharf, Farringdon and soon Victoria, too.

Meson Don Felipe: One of London’s oldest Spanish restaurants and always a good-time spot on The Cut.  It comes complete with a guitarist on a raised chair attached to the wall.

Seven at Brixton: Coffee and cocktails are complemented with Spanish bites. Try the Full Spanish breakfast for a twist on our national favorite.