British contemporary artist, Lincoln Townley has revealed the latest addition to his extremely successful “Icons” series: a portrait of HM Queen Elizabeth II, in celebration of her 90th birthday this month. The original oil and acrylic painting, created in a Warholian homage style, was purchased within minutes of its release by an American collector.  The details of the sale remain private, but the image is believed to have been sold for more than Townley’s portrait of David Bowie, which fetched £250,000 in March of this year. The portrait was unveiled at “LA to London Street Week” a major art event hosted by Sur le Mur in honor of Brit Week LA.

ICONS paintings and prints are currently being displayed at Hilton Hotels throughout the UK, where Townley has been appointed Artist in Residence. He has also recently partnered with BAFTA LA to produce a series of ICONS portraits for their leading stars and Britannia Awards nominees.

Townley’s original works are a subconscious journey into a past life, littered with intense emotion and vibrant energy. Some of his best known works have come out of his experiences on the streets of Soho, tales of addiction and subculture permeate every brushstroke of his pained subjects. Townley talked with Destination Luxury about fighting his demons about his battle with drugs and addiction and how he is inspired to create these unique pieces of art.

Destination Luxury: Where were you born?

Lincoln Townley: I was born in Hackney, London. I spent most of my childhood there and my painting started at the age of around 7 when I used to visit my Grandfather at the weekends at his studio he was an artist and an engineer. 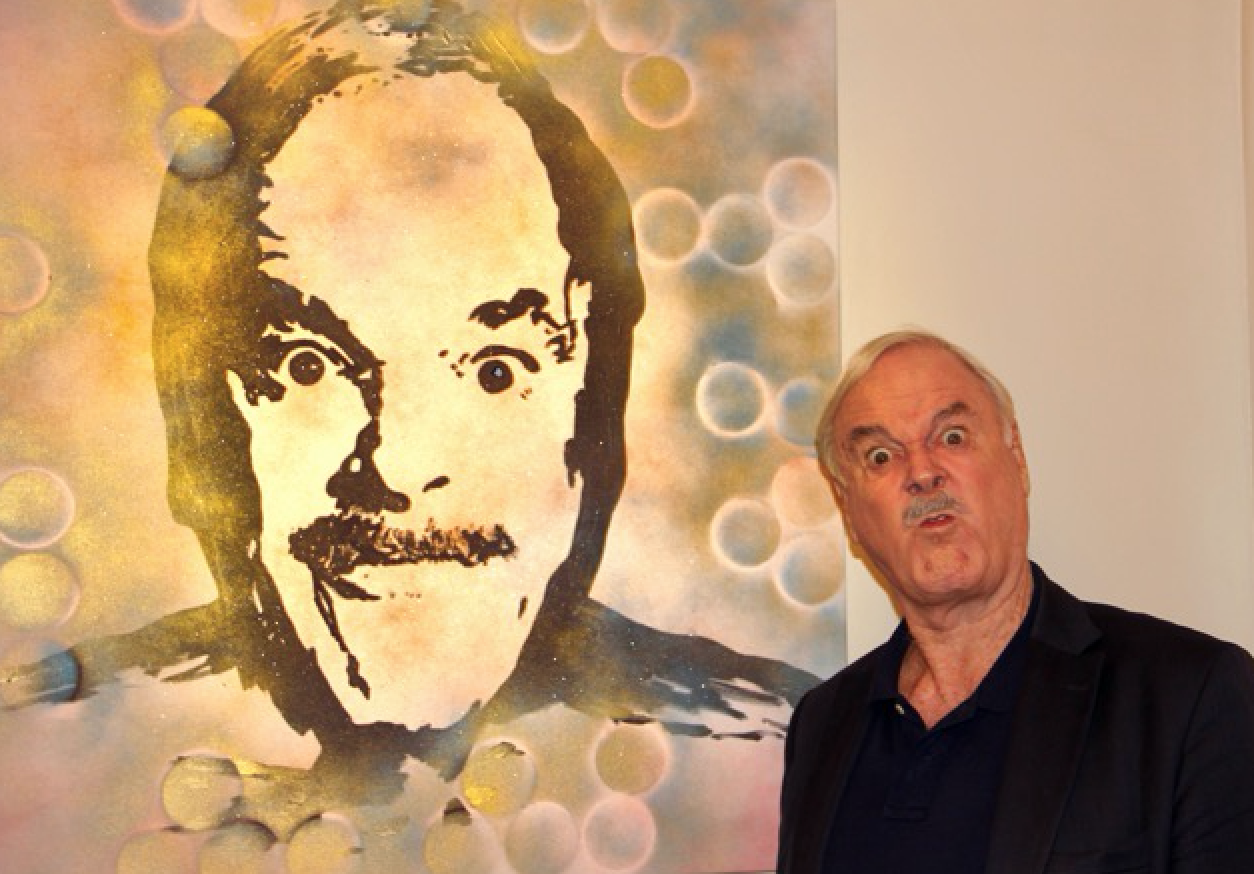 John Cleese with Townley’s image of the actor.

Destination Luxury: When did you know that you wanted to become a artist?

Lincoln Townley: I was thrown into painting by my grandfather I spent the ages of 7 to 12 with him every weekend as my mother had to work and he would be very strict on what I could do in his studio to begin with, he would have me drawing faces of people constantly over and over and showing me the way to “capture” someone’s image as he was obsessed with portraits of strangers he had seen in and around London. It sort of rubbed off on to me. I loved going for walks with him around central London watching different people then sketching them and then taking the drawings back to the studio to develop. All I knew at that age was I wanted to be a painter…

Destination Luxury: What did you do for work before you set your sights on being an artist?

Lincoln Townley: I worked in nightclubs and strip clubs in Soho in London’s West End. I was constantly painting during this time and losing myself on alcohol and drugs which had a huge influence on my work. I knew I had to stop but I found it helped with creating powerful dark images so I felt at the time it was not a bad thing.

I gave up the nightclub business 5 years ago and wrote my memoir called The Hunger, which was the first collection of paintings I positioned to sell once I decided to paint for a living, many of these paintings have never been seen, a selection of them will be in my retrospective at The Saatchi Gallery in London in October later this year.

Destination Luxury: What inspires you to create art?

Lincoln Townley: I am interested in the drive of my subjects, many of the famous people I paint have incredible energy and drive I love that, I want to capture these images in their portraits. I’ve painted many famous people and they all have different qualities which I believe I get down on the canvas. The actor Michael Caine told The Independent newspaper in the UK that he believes I’m the next Andy Warhol! All these things fuel my desire to do more and create.

Destination Luxury: Who is your favorite artist, past or present?

Lincoln Townley: My favorite artist is Francis Bacon. My grandfather was obsessed by his dark subject matter and ferocious images which have clung on to me all my life, not only do I paint Icons of the world but I paint the darkness of mankind, the drive that can sometimes take a man to the edge and what he consumes ends up consuming him! That’s what my Hollywood collection is about.

Destination Luxury: What’s the toughest hurdle in life you’ve had to overcome?

Lincoln Townley: Drinking, drugs and womanizing. These are harnessed by the desire to be sober and paint not only my demons but constant dark feelings I have inside.

Destination Luxury: What is your proudest achievement as an artist?

Lincoln Townley: Painting the portrait of Al Pacino: he was incredibly cool and we talked through the process and he has the piece on his wall in New York.

Destination Luxury: You have painted portraits of several A-List celebrities for your “Icons” series.

Lincoln Townley: My first Icon painting was of the actor and comedian Russell Brand. Russell asked me to paint it three years ago and we sold it through an auction and it raised $20,000 that’s how it all started and many more faces followed. I tracked down the buyer recently and its going into The Icons collection show in London’s Royal Academy in June this year it’s gonna be the star of the show…

Destination Luxury: Who is the one person you would most wish to meet and paint?  And why?

Lincoln Townley: I would most like to paint Barack Obama. He has a power so intense I would love to see how it would play out on canvas.

For more on Lincoln Townley you can find him in the following locations: