THE 8 MOST HIGH TECH LUXURY CARS IN THE WORLD.

One of the best things about luxury cars is the technology we find inside them. Forget speed and power for a minute and let’s look at gadgets! Everyone loves a futuristic gadget, especially in our cars. We’ve all fantasized about driving one of James Bond’s technology laden cars. Well, we haven’t quite found any with rocket launchers and lasers, but we’ve got some stunners.

The true test of a luxury car is the comfort and experience of the driver. Technology can benefit your driving experience significantly when done correctly. The first car to feature air conditioning was a luxurious revelation. Heated seats soon followed and dashboards that spoke to us. It’s these little extras that are the mark of a luxury car. They make driving fun, comfortable and intuitive. Whether it’s a 4×4, a luxury saloon or a sports car, we love them all.

Today we’re looking ahead to the future. We’re looking at the future technology that’s hiding in the world’s most expensive cars. This technology will eventually become commonplace. But, for now, it’s the preserve of the wealthy. Let’s take a peek inside their world and see what’s shaping up in the world of car tech.

Volvo S80 – The Volvo S80 contains a safety feature that both fascinates and terrifies us. Within its design, the Volvo has a heartbeat detector. It recognises and monitors your own heartbeat for any dangerous health conditions. But, here comes the scary bit. Volvo claims the main reason for this feature is to prevent kidnappings. Yes, kidnappings! The car will detect if there’s another person hiding inside your car and alert you. We told you it was terrifying.

Acura TL – Acura are a brand created by Honda to occupy the luxury end of the market. The TL is a great place to look for intuitive, future technology. With the Acura TL, Honda have opted for complete and utter driving comfort. Every little detail is designed around the comfort of the passengers and the driver. The jewel in the crown? Well, the TL harnesses the power of GPS to alter the temperature in the car. For example, if the sun is beating down on one side of the car, it will lower the temperature there. On the other side, covered in shadows, it will increase the heat. Clever.

Mercedes Benz S Class – Mercedes have always been at the heart of luxury motoring. They have mastered the fine art of craftsmanship and sophistication. The newest S Class is no different. Our favourite feature is the attention assist function. It monitors the driver’s eye movements and it knows when your attention is drifting. It can tell if you close your eyes and drift off. When you do, it will alert you with a series of noises and visual stimuli. Wake up! Mercedes are also the proud owner of the closest thing to a self driving car with the S550. That really is the future.

Audi TT – Audi are leading the way when it comes to infotainment. That’s the handy name that tech circles have given the dashboard technology in our cars. It refers to the information and entertainment systems on our dash. Audi were the first to introduce an entirely digital display. You can shrink and move dials with your fingers. It’s quite something. Every other car manufacturer is following suit and this will soon become commonplace. Browse a car dealer like Harratts and you’ll come across one or two new models with this technology. BMW i8 – The BMW i8 is irrefutable proof that hybrid engines can be both efficient and powerful. Car enthusiasts have long scoffed at the idea that an electric engine can generate high speeds. They have been proven utterly wrong in the last two years. The BMW i8 hit the scene with its top speed of nearly 160mph. There are others of its kind too. The Porsche 918 Spyder hosts a hybrid engine with a combined horsepower of nearly 1000bpm. That’s the same as an F1 car. 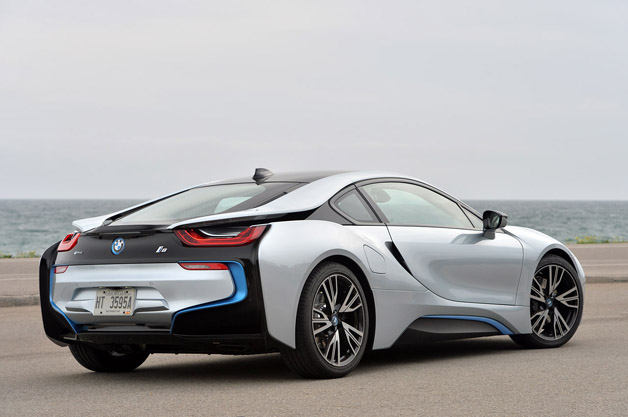 BMW 7 Series – Yes, another BMW. This one has all the hallmarks of James Bond with its innovative night vision feature. We’ve all struggled with driving in the dark, especially when the street lights disappear. It’s a drain on your eyes and on your concentration. The 7 Series gives you a head up display and shows the road ahead in full night vision clarity. The BMW also has a sophisticated pedestrian recognition system. It will show up cyclists and pedestrians that may prove difficult to see.

Jaguar – The technology we’re about to describe doesn’t actually exist in a car just yet. But, we’re including it because it’s so mind-blowingly brilliant, we couldn’t ignore it. It has come from the brains of engineers at Jaguar Land Rover and it takes technology to the next level. They plan to use the entire glass windscreen as a digital display. They’ll project images and navigation onto the windscreen right in front of you. Their revolutionary idea is to project a ‘ghost car’ onto the road ahead of you. You will simply follow the ghost car to your destination. It will change the way we use satellite navigation. Infiniti M – After the ‘ghost car’, this one almost seems quite boring. But, it might just save your life. The Infiniti M boasts a sophisticated lane detection system. It recognises when the car creeps over the lane markers and into oncoming traffic. It will alert the driver immediately. However, if the driver doesn’t make an alteration, the Infiniti will pull back into the correct lane by itself.

We’re so excited just thinking about all of this technology. And it’s all just around the corner. The best thing about modern technology is that is moves so fast. Within five to ten years, each one of these features will be commonplace in our new vehicles. For now, they are the preserve of the rich and famous in their expensive cars. We can only admire and dream about what the future holds. Don’t worry, it’ll be here faster than you can say ‘Ferrari’.